When Oscar-favorite Mo'Nique accepted her Academy Award for Best Supporting Actress in a Motion Picture she began powerfully and matter-of-factly, toting, "First, I would like to thank the Academy for showing it can be about the performance and not the politics." The actress and comedian, who wore royal blue with a gardenia in her hair emulating Hattie McDaniel from some 70 years ago, was hitting on something major: the 82nd Annual Academy Awards was a night history was made in numerous ways, and performance truly did outshine politics.

For me the performance of the season was that of Ric O'Barry. Some Oscar fans may not recognize the name, but those who saw this year's winner for Best Documentary Feature, The Cove, know him as the heavy-hearted, honest hero of not only the film, but of a near life-long movement to save dolphins. Without a doubt all the nominated documentaries this year could be described as "political," but it was O'Barry's passionate performance that captured the win.

In The Cove O'Barry, with director Louie Psihoyos use hidden camera techniques to, for the first time, attempt to uncover the slaughtering of 23,000 dolphins annually in Japan, targeting a fenced-in National Park in Taiji, a small coastal town. They risk their lives to raise international awareness for dolphin drive hunting, a grisly mystery that before O'Barry, so few knew of. The film also documents O'Barry's history with dolphins, which began when he captured five dolphins in the 1960s to train for the popular television series, Flipper, only to watch one of the dolphins "commit suicide" in his arms, changing his entire perspective on the work he had been doing prior.

To say O'Barry is tireless for his cause would be an understatement. As The Cove producer Fisher Stevens proudly held his Oscar, graciously thanking those involved, O'Barry said nothing. Instead, he unraveled a sign reading "TEXT DOLPHIN to 44144." By texting the number, participants can contribute to fight against dolphin slaughter.

What is remarkable about this year is that all of Hollywood is behind Ric O'Barry, with a weekend of parties and fundraising events celebrating his Cove-cause. I was fortunate enough to join O'Barry at the official cocktail party honoring the film where stars like Ben Stiller, Russell Simmons, Sex in the City's Evan Handler, Clifton Collins Jr. and Hayden Panetierre, who risked her own life for Save the Whales, all came to toast Hollywood's biggest star.

It was truly a weekend of celebration for Ric O'Barry and his cause. Celebration of an outstanding performance. Celebration for a hope for change. And now, with a golden statuette embellishing his cause, Hollywood behind him, and millions in Japan watching The Cove take gold, the Japanese government will have no choice but to take note, and change is on its way. 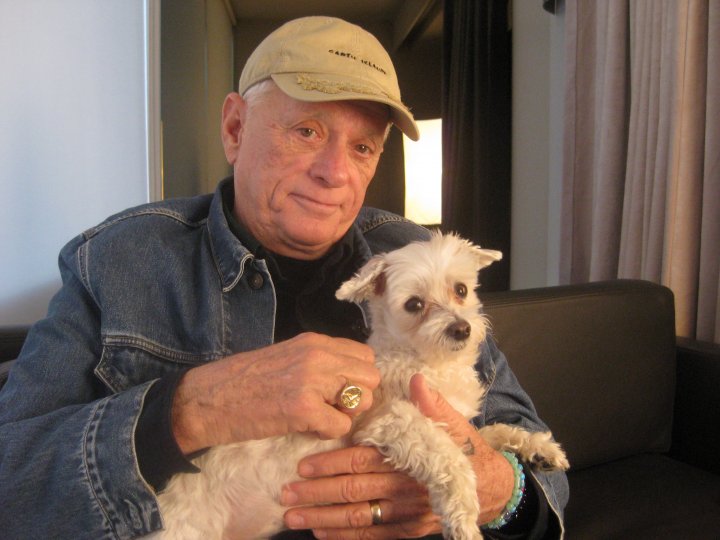