It sounds like something straight out of science fiction: a laser no bigger than a grain of rice that uses one-billionth of the electric current needed to power a hair dryer.

But researchers at Princeton University have created just such a device--and they say it represents a big step forward for quantum computing.

"It is basically as small as you can go with these single-electron devices," Dr. Jason Petta, a professor of physics at the university and the leader of the team that built the laser, said in a written statement.

To create the microwave laser, or "maser," Petta and his colleagues used thin nanowires to link up pairs of quantum dots--artificial molecules made up of bits of a semiconductor material called indium arsenide.

Then they placed two of these "double quantum dots" six millimeters apart inside a small cavity made from superconductor material, called niobium, with mirrors on either side.

When the experimental device was hooked up to a battery, electrons flowed through the quantum dots. As the electrons transitioned from a higher energy state to a lower one, they emitted photons in the microwave range. These particles of light bounced off the mirrors to produce a focused beam of microwave energy.

"The remarkable feature of this device is that it is 'pumped' by single electrons tunneling from one quantum dot to another," Petta told The Huffington Post in an email. "It is like a line of people crossing a wide stream by leaping onto a rock so small that it can only hold one person," he added in the statement. "They are forced to cross the stream one at a time." 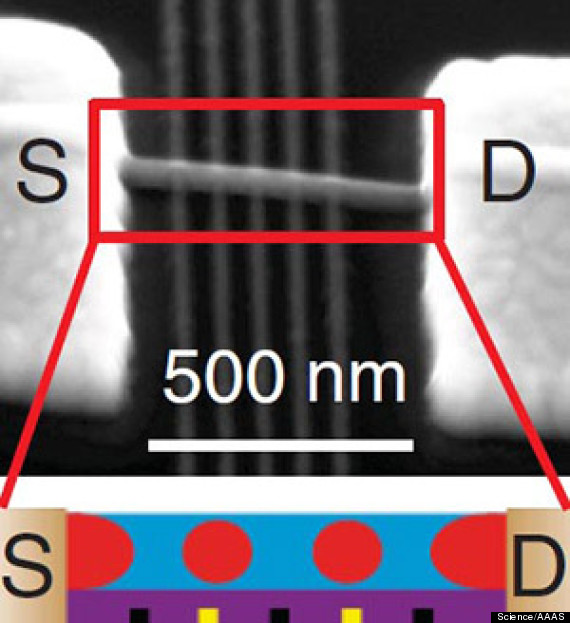 A double quantum dot as imaged by a scanning electron microscope. Current flows one electron at a time through two quantum dots (red circles).

Exactly what good is such a device? The researchers hope to use double quantum dots as quantum bits, or "qubits," which are the basic units of information in quantum computers.

One of the biggest challenges in quantum computing is coupling qubits so that they can be used to send information over large distances. Quantum dots may help solve this problem, according to Petta.

"Imagine trying to communicate a message over a long distance by forming a line of people and having each person relay the message to the person in front of them," he said in the email. "Using a photon, or light particle, to couple two quantum dots is analogous to directly flying the message from the first person in line to the last person in line."

A paper describing the laser was published Jan. 16 in the journal Science.