On Wall Street, the debate about wealth inequality is all but over, except for finding ways to make tons of money from it.

The rich are going to keep getting richer all over the world, pretty much just as French economist Thomas Piketty describes in his bestselling book Capital In The Twenty-First Century, stock market strategists at Bank of America Merrill Lynch wrote in a new report. But don't despair, the bank added, there are several ways for investors to profit from the trend.

This is reminiscent of the "debate" over climate change: While partisans might still haggle over its importance and/or existence, companies and governments with lives and treasure at stake are already adjusting to its reality. So too with rising wealth and income inequality.

The report's authors, led by Ajay Singh Kapur of Merrill Lynch Hong Kong, brushed off a recent Financial Times critique of Piketty's work that questioned some of his data choices and basically accused him of making stuff up. Piketty has answered those charges, mostly to the satisfaction of other economists. And very few people (aside from critics on the right and maybe at the FT) question Piketty's vision of rising inequality. Not even Merrill Lynch doubts it.

"We are aware of the controversy over Piketty’s math (see the FT Money Supply blog), but are generally comfortable with the thrust of his analysis, having read his 577-pager, looked at his (problematic) spreadsheets, and cross-checked his data with alternative, credible sources," the authors wrote. "His questionable assumptions do not detract from the power of his thesis."

Merrill Lynch made this chart, using Piketty's numbers, predicting that wealth will rise much faster than economic growth in major economies all over the world: 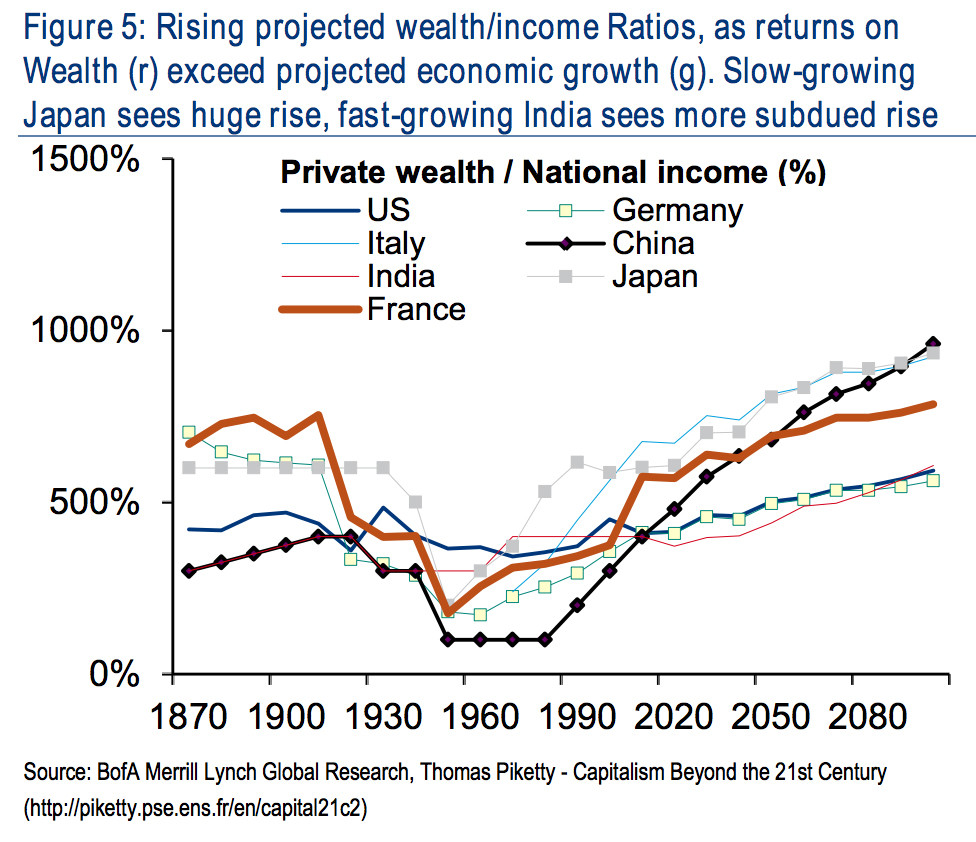 Merrill pointed out that it has been predicting the rise of "plutonomies -- economies where economic growth is powered by and largely consumed by the wealthy few" -- for the past decade. While this might sound like a nightmare world for some of us, it is also a chance to make a bunch of money, for those (mostly rich people) with the means to invest in companies that most profit from the wealthy elite. This includes luxury goods makers, money managers and private banks.