Rich Lee, who might be the first person to have ever implanted an earbud in his ear, explained the process this week in a post on Humanity+, a nonprofit that "advocates the ethical use of technology to expand human capacities."

Lee, who is part of a subculture of body modification artists, had a small magnet embedded into his tragus, the stiff flesh directly outside his ear. He then built himself a device, resembling a chunky necklace, that "creates a magnetic field causing the implant to vibrate and produce sound," as Gizmodo reports.

Now Lee can listen to music any time he wants, but that's not the only thing he plans to do with his newly implanted earbud. He wrote that since he might soon be considered legally blind, he would hook up the earbud to an "ultrasonic rangefinder," which would help him use sound to estimate how far away things are. He also wrote that he will attach the earbud to a "directional mic of some sort" so he can listen to conversations happening across a room.

Body modification increasingly incorporates "biohackers," those who modify their bodies with things like magnets and radio-frequency identification chips to get additional senses. The Pittsburg-based collective Grindhouse Wetwares says that the ultimate aim of the subculture is "augmenting humanity using safe, affordable, open source technology."

Lee's magnetic implant, now healed, can be seen in the photograph below. 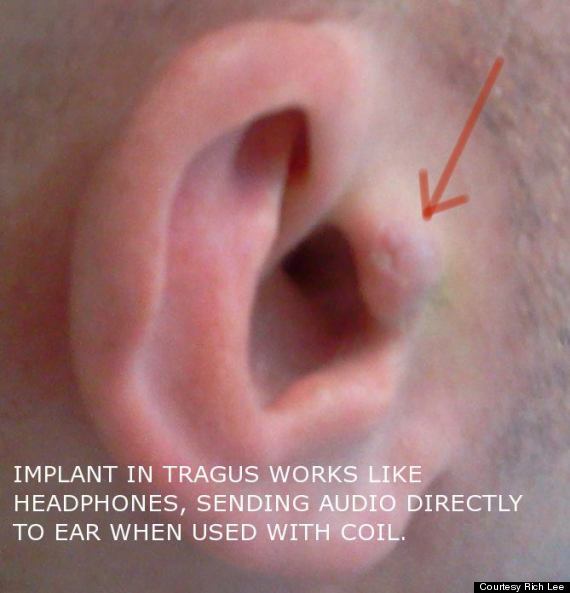 Body Modifications That Give You A Sixth Sense