An investing client of mine asked me Sunday morning if I thought it was fair that 50% of Americans paid little to no federal income tax.

Of course, this is a loaded question. Others have pointed out that while some poorer Americans pay little to no federal income tax, they do pay 15.3% FICA taxes which covers their contributions to Social Security and Medicare, a highly regressive tax because only your first $106,000 of income is subject to the tax. In addition, local sales taxes are highly regressive because the poor and middle-class end up having to consume a much larger percentage of their income just to get by.

But the question got me thinking. What do the poor and middle class do with their money? Have they figured out some great way to avoid taxes? If they don't have Swiss bank accounts or tax shelters in the Cayman Islands, how exactly are they avoiding paying federal income taxes? What I found out was terribly disturbing.

I decided to examine household incomes in America by quintile to see, if indeed, the rich were paying too much tax. Following is a breakdown by quintile of the average incomes for American households for the year 2010. I have also included the data for someone with a million dollar income just to see what he or she ends up paying in tax;

Rather than making a traditional calculation on what percent of their total incomes each quintile pays in federal taxes (including FICA taxes), I thought it would be interesting to ask what percent in taxes they each pay after paying for basic necessities like food and shelter. I tried to come up with an estimate of what amount of money one would have to pay each month just to barely get by, to barely keep his or her head above water. Here is my estimate. You can see it is a very low estimate of what it costs to live in the US as it doesn't even include anything for medical expenses or health insurance or the required savings needed to send your kids to college or to retire on. 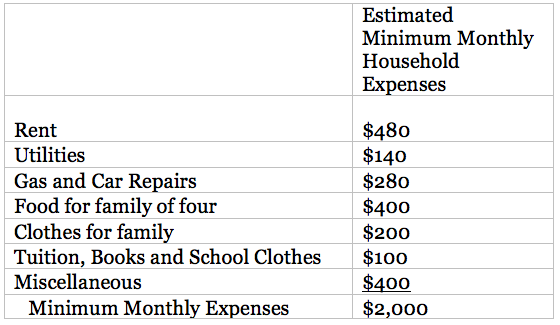 I know this is low and I challenge anyone who disagrees to try living on $2,000 a month for a while and to feed and clothe a family. But, let's call it the bare necessities and see what it means for American families.

If you subtract this $2,000 a month or $24,000 per year from the various quintiles' incomes, the following pre-tax disposable incomes result; 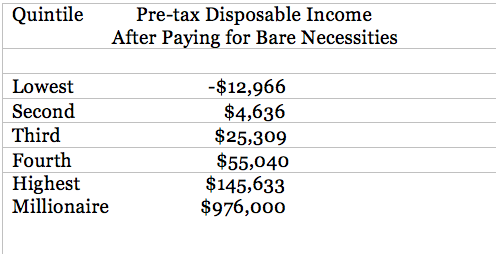 And here are the actual average taxes paid by quintile;

And so, here are the tax percentages that each quintile actually pays as a percent of their true disposable incomes assuming everyone needs at least $2,000 a month just to get by; 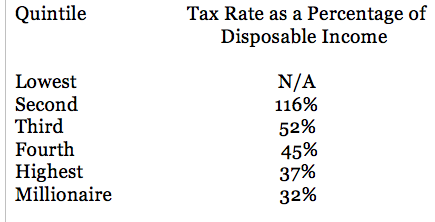 This certainly doesn't look fair, much less progressive. A rate cannot even be calculated for the lowest quintile because they are $13,000 negative in the hole before even paying their taxes. Similarly, the second quintile owes more taxes each year than it has available after paying for basic necessities. The third quintile represents the median income earner in the United States and is paying approximately 50% more of their disposable income in taxes than our richest Americans.

This is clearly a terribly regressive system in which the least among us are asked to pay the most from our disposable incomes. When looked at from this perspective there is no question that the wealthy have to pay a greater share of the taxes if we have a chance in balancing the federal budget.

What have we done? We have opened trade with countries that pay their workers less than one dollar an hour and get away with it because the cost of living in those countries is so low. But our own workers cannot be forced to compete with such low wages as it costs much more to live here.

I have watched my native Kentucky lose its manufacturing plants overseas and have its union plants busted up solely by the threat to outsource jobs. Manufacturing wages in my parent's home town in Kentucky have declined from $15 an hour plus benefits to $7-$8 an hour with no benefits. You cannot raise a family on seven dollars an hour even if both parents work.

We are killing this country. CEOs, entrepreneurs, bankers, lawyers, doctors and politicians at the top of the pyramid are all benefiting from the lower cost of labor for their employees and the lower cost of goods imported from low-wage countries. But our workers, our dear workers are getting crushed. This is not the America I grew up in. And this shall not stand.

John R. Talbott is a bestselling author and financial consultant to families whose books predicted the housing crash, the banking crisis and the global economic collapse. You can read more about his books, the accuracy of his predictions and his financial consulting activities at www.stopthelying.com

Bestselling author of Survival Investing: How to Prosper Amid Thieving Banks and Corrupt Governments and professor of finance at S P Jain School of Global Management