There's another way the rich are different from you and me: They live longer.

The more money you have, the healthier you are and the longer you live, according to a new study from the Urban Institute crunching data from the Centers for Disease Control.

And that outcome is remarkably consistent. Bloomberg's John Tozzi points out that in almost every category of ailment, from heart disease to arthritis to kidney disease to strokes, prevalence drops almost in lock step as income rises.

The same phenomenon is true, the CDC finds, for life expectancy. This chart shows just how steps up in income lead to longer lives. 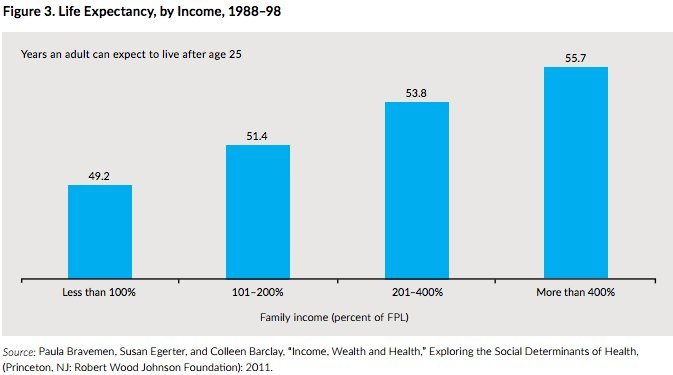 There are dozens of reasons why every bit of extra wealth and income improves health and lifespan. Access to better health care is only the most obvious. Richer people also benefit from better living conditions generally, the study's authors note.

The poor are also far more likely to be stressed, worried, sad, and angry than the rich, according to an analysis by the Brookings Institute's Carol Graham. "In the United States", she writes, "poverty is exacting a high cost."

And a separate CDC study last week found that, the higher you are on the income ladder, the less likely you are to be sleep-deprived.

In other words, being rich is the best health-care plan America offers.