Conservatives like to say that "a rising tide lifts all boats." In other words, if an executive makes $20 million a year, his income will eventually trickle down into the rest of the economy and ultimately benefit poor people.

Imagine the lines below as tides. As you can see, one is rising, while the others are falling (and one is stagnant): 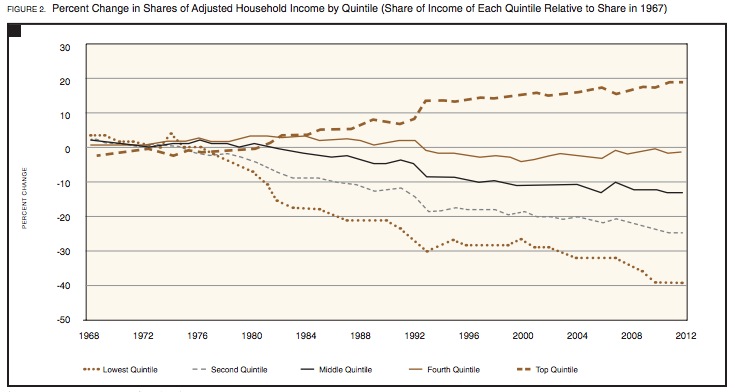 The chart comes from the Stanford Center on Poverty and Inequality's recently released 2014 report. The researchers looked at rising poverty and inequality in the U.S., particularly since the 2007-2008 recession.

Other studies have shown a correlation between bigger tax cuts for the 1 percent and income inequality. In the U.S., the top earners have made more money in the last 60 years as the top marginal tax rate has been slashed and as the rising dominance of Wall Street has allowed a few to make enormous profits.

An OECD study in 2013 found that the U.S. had the highest income inequality in the developed world. Out of all nations, only Chile, Mexico and Turkey had higher levels of income inequality, according to the study.

So what does this all mean in actual dollars? It means that more than half of U.S. wage earners made less than $30,000 in 2012, which is not far above the $27,010 federal poverty line for a family of five. Meanwhile, the top 10 percent of earners took more than half of the country's total income in 2012.

In other words, a rising tide has lifted a few big boats and washed the rest aside.