Let's not get crazy. Let's not take the NBA's rather surprising and (cautiously) encouraging smackdown of racist billionaire team owner Donald Sterling - a member, mind you, of the most inbred, powerfully entrenched clubs in history, humans who've quite literally gotten away with murder since the dawn of American capitalism (hi, Koch Brothers) as anything other than what it likely is - as rare as an abortion clinic in Texas, as precious as a good book in Idaho.

Depending on your personal cynicism quotient, you can also see the NBA's double-barreled rejection of Sterling merely as the brand protecting itself; commissioner Adam Silver surely weighed the costs/benefits of various punishments and realized the cultural damage from a wimpy wrist-slap would've been far worse than dealing with Sterling's imminent lawsuits and scowling outcries, et al.

Whatever. From all indications, it's been obvious for years that Sterling is a long-established racist, a creep and a bit of a monster. Even the NBA knows it. The only real scandal is that it took the league so long to do anything about it.

And let's skip right by other controversial team owners and murky league histories - that's never been the purview of this column, and besides, professional sports is so rife with hypocrisy, egomania, celebrity and capitalist doublespeak that to hold the Sterling decision up as some sort of sparkling moral standard would be short lived, and just a little bit gross. Right, Redskins?

Despite all that, there is something very worthy of note in the Sterling story, a potent reminder of the historic tonal shift that's been underway in American life for nearly two decades now, and which was hammered home most persuasively in the 2012 election. 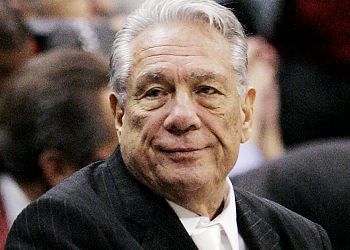 It's simply this: old, wealthy white males no longer rule the universe like they used to. They are no longer free to roam like unchecked king of the beasts, safe in the knowledge that the social architecture supports and encourages their every bigoted whim and egomaniacal burp. Obviously? Not even close.

Old, rich white males, once the primary organizing principle of American politics and religion, and therefore the perfect, go-to demon of every female activist and women's studies program in the land, are literally dying off in power and significance.

To be replaced with - well, who knows what? Some new, mutant form of power and money, to be sure (capitalism never dies - it merely adapts). But at least it ain't the same old patriarchy anymore, the one that's ruled since the Romans joined with the church to entrench the male paradigm, demean the Other and make all women whores. Isn't that amazing? Sort of?

Don't just take my word for it. Surely you've witnessed the birth (and subsequent, ongoing, sputtering death) of the Tea Party - essentially a cult of panicked white Southern males terrified of losing their grip on... well, just about everything?

The Tea Party was born of this exact shift. Theirs is a relatively small, but very vocal gaggle of aging white Southerners clinging desperately to the last vestiges of what made their America "great" - sexism, racism, xenophobia, homophobia, repression, isolationism, guns, sexual dread, anti-science lug-headedness, mal-education and a total lack of fresh salads.

Can we slot the Sterling slapback into this same category? I think we can. After all, the NBA is just like any other major American corporation - hell-bent on protecting and maximizing profits. But until recently, that protection has been afforded by the wealthy elite, the true demon-lords of capitalism. And now they just ate one of their own. And the rest of the country cheered wildly. Well, most of them, anyway.

Which goes to show you -- what, exactly? The power of the new, mixed-ethnicity...