Joe DiMaggio hit in 56 consecutive games for the Yankees back in 1941. Don Larsen, David Cone and David Wells all pitched perfect games for the pinstripes.

Richard Albero may not be a Bronx Bomber, nor a record-setting athlete, but last Tuesday, the day after Memorial Day, he concluded what may have been as impressive an accomplishment as those of any of his Yankee heroes.

A retired high school teacher and coach, Albero, 65, walked nearly 1,200 miles from George M. Steinbrenner Field in Tampa to Yankee Stadium in the Bronx without a twisted ankle, a broken bone, a pulled muscle or anything more serious than a blister. He walked 15 to 20 miles a day, a regimen that would daunt many professional athletes.

Albero, who graduated from the Merchant Marine Academy and served in the U.S. Navy Reserve at the time of the Vietnam War, dedicated his trek to the memory of his nephew, Gary, who passed away on 9/11, and to the Wounded Warrior Project. Along the way, he raised more than $25,000 with the help of Andrew Levy of Wish You Were Here Productions, a New York-based sports marketing agency.

When Albero arrived at Yankee Stadium on May 26, he strode through the outfield gate and down to third base with six Wounded Warriors. One of the warriors, a veteran of Iraq, pointed out that Albero had the same "sunglass lines" that he had from combat duty.

Albero said that it was like having "six big brothers" with him at the stadium as the servicemen accompanied him everywhere and asked if he needed anything, such as water or food.

Then Albero headed to home plate, where the entire Yankee team, led by manager Joe Girardi, awaited him. He shook the hands of all the players and coaches, just as he had in Tampa at the outset of his trek, and the club presented him with a check for $25,000 to the Wounded Warrior Project.

Later, in front of an energetic crowd that included his grown children, Albero threw out the first pitch, "a perfect strike," he said with a chuckle, and he brought the Bombers, who have played erratically this season, a victory, a 5-1 win over the Kansas City Royals. 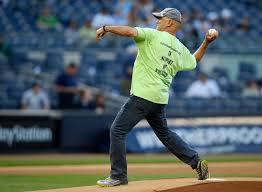 Levy, who acted as a "mission control" for Albero over the course of his three-month jaunt, said, "The fact that Richard accomplished his goal within his scheduled time frame crossing the George Washington Bridge on Memorial Day, with no injuries and no setbacks, should be celebrated. Drawing inner strength from his nephew Gary's spirit speaks volumes for their connection to each other, to the Wounded Warriors and to the New York Yankees. All champions coming together for a great cause."

Given that Albero has a military and nautical background, one might think that he would have the zeal of Captain Ahab in pursuit of Moby-Dick.

But Albero is a peaceful man and, if he conjures any literary precursor, it is Don Quixote, as I wrote in my first piece on him back in March.

Albero may have been obsessed and even possessed at times on his journey. At one point, he was so focused on his task that he plowed past one of his support drivers without acknowledging him.

But Albero's imagination, vision and strength have a serene quality.

Raised Catholic and deeply spiritual, Albero told me in my March and April installments about how he sometimes "kept his sanity" on his epic quest by "talking to the cows and the bulls" on the country roads; at times, he also talked to his late nephew, Gary, whom he pictured "sitting on a cloud" with Albero's parents and grandparents.

Although he does not go to church regularly and does not consider himself to be particularly religious, Albero said his prayers every morning on the trek. He envisioned St. Christopher, protector of travelers, on his right, and St. Francis of Assisi, patron saint of all saints, on his left.

Every morning he would stick his arms out as if he were hugging the saints and ask for help and guidance on his day's journey.

As has been noted elsewhere, Albero dodged cars, trudged through knee-high weeds and battled rain during his three-month trek, which began on March 2.

He also had an encounter with three big dogs. When we spoke on June 3, Albero, who owns several St. Bernards and is an animal lover, said that he thought the encounter took place in South Carolina.

One of the big dogs, which was not on a leash, "leaped over a ditch" and confronted him at the edge of its property.

"There's nothing scarier than a dog with a Southern growl," said Albero, who added, "I thought it was going to make a chew toy out of me."

Whether it was simply good fortune or the blessing of St. Francis, who blessed the animals as well as the poor, Albero stood his ground. He could not remember if he said, "No!" or "Stay!" or "You don't want to do that!"

Whatever he said, the dog "got the vibes from me," the vibes that he is an animal lover, an animal whisperer, like St. Francis or King Solomon, who was said to be able to speak to animals.

Albero also told me about another encounter, which he thought occurred in Virginia, when he met a horse, which ambled slowly toward him. "It was an old horse; I don't know how old horses live, 40, 50 years old. I could see it had trouble walking."

The horse came up to Albero and stared at him. "I could swear those eyes were human." He said that it was as if the horse "was transferring something, like strength" to him. Albero called it "one of the weirdest sensations."

But there were a lot of weird sensations or synchronicities along the trek, including at the 9/11 Memorial, where Albero placed a Wounded Warrior flag, Yankee hat and flower on his nephew Gary's name plate. 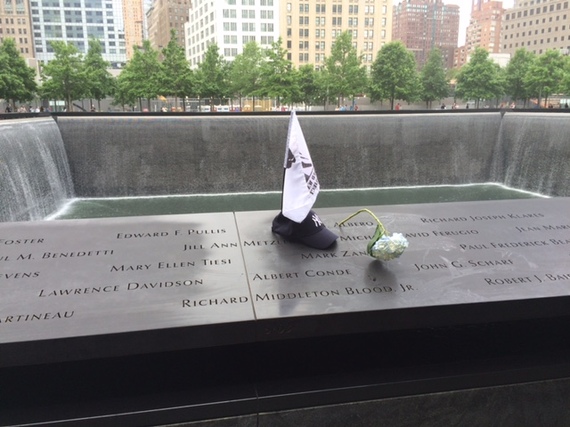 An official from the YES Network told Albero that the footage will run on June 7, which would have been Gary's 53rd birthday, a fitting tribute to Albero's late nephew.

As for Albero's next project, he is selling his home and plans to buy a farm or ranch, where he will raise St. Bernards, who will be specially trained to work with Wounded Warriors.

As for the mission of our troops, Albero had this to say. Seeing the wounded warriors come back from combat "helps you to put into perspective how great our country is."

At a time when less than half of one percent of Americans serves in the military, Albero said that it is not enough for him simply to tell troops, "Thank you for your service."

He said that he wanted to "do a good deed in honor of their service."

He added, "Maybe, in some small way, this makes people more aware" of the wounded warriors and other troops. And maybe more civilians can do good deeds "before it's too late."

For those who wish to donate to Albero's cause on behalf of the Wounded Warriors, you can still do so at www.richardsyankeeswalk.org.