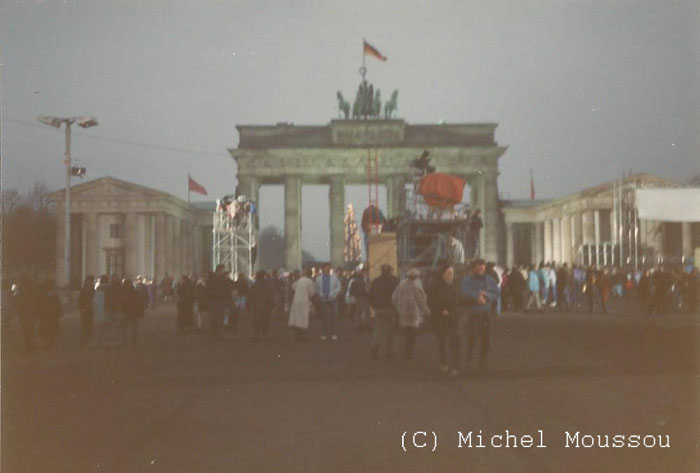 Twenty-five years ago the Berlin Wall started to crumble -- one of the most striking historical events of the twentieth century. World-renowned photographer Richard Avedon's visual account of this moment in history is not only considered as the high point of his career but also as one of the strongest journalistic photographic depictions of all time. This is a first-hand recollection of the background story behind the shooting of the photographs and of the extraordinary atmosphere that prevailed in Berlin at the end of 1989.

The piano stage-rehearsal at the opera was interrupted by a man who entered panting and gesticulating for everyone to follow him. It was the morning of November 9, 1989. A tinny voice was coming out of the transistor radio of the security guard. The communique was so specific that it sounded ambiguous. It said that "from such hour, crossings of the border between the two Berlins would be allowed at official checkpoints." Could this mean that the wall was no longer serving its function? In utter disbelief, or rather convinced that this must have been a state-promoted hoax, everyone rushed out towards the border.

"Mind you that's how they tricked us into boarding the trains...," said an elderly woman who owned a little tobacco shop, hinting at the horrible train rides to the Nazi extermination camps.

At the end of the Second World War, following the Allied victory over the Nazis, Winston Churchill announced that "an iron curtain has descended across the Continent," referring to the partition of Europe between East and West known as the Cold War. Its most enduring symbol was the Berlin Wall, a structure created to divide the former German capital into two distinctive sections. In essence, the true purpose of the wall was not to fence off intruders (as advertised by East German authorities) but to fence in the people of East Berlin, forcing them to remain in the Soviet sector of occupation against their own will. Anyone who succeeded in climbing the wall was greeted in the West as a hero. Unfortunately, most contenders never made it across, their countless unmarked graves bearing witnesses to this sordid reality. Thus the Berlin Wall was regarded on both sides not only as a symbol of hatred but also as a symbol of permanence.

Notorious as the location of exchange of arrested spies, and featuring in countless films, Checkpoint Charlie was inundated that November day by Berliners. East German guards seemed in no position to control such fast growing crowds. The first people began trickling past the checkpoint. They seemed worried and perplexed. They would walk slowly and cautiously, as if expecting some form of retaliation; they would then take a last look back and disappear behind the fence of the frontier post. This slow moving procession went on for about an hour; then the dam broke and people began crossing in droves.

The wall that was built as if in one night had been rendered obsolete in a few hours. Such scenes of suspended animation were reproduced for weeks by every TV channel on earth leaving the world stunned. For the next few months every major artist in the world would decide to fly to Berlin and experience this rendezvous with History. Leonard Bernstein said that conducting Beethoven's "Ode to Joy" on location was the highpoint of his career. So did Mstislav Rostropovitch, who gave a concert in the no man's land section of the wall, in memory of the victims.

It was in late December when I was asked by Nicole Wisniak, publisher of Egoiste magazine, and Richard Avedon, the exclusive photographer for the publication, to accompany them in Berlin and guide them through the more restricted East. They were interested in witnessing the upcoming New Year's Eve. A series of portraits of stage directors from both sides of the wall was initially contemplated (like Harry Kupfer of the Comic Opera and Peter Stein), but conflicting travel schedules made this impossible, and so the weight fell on East Berlin. 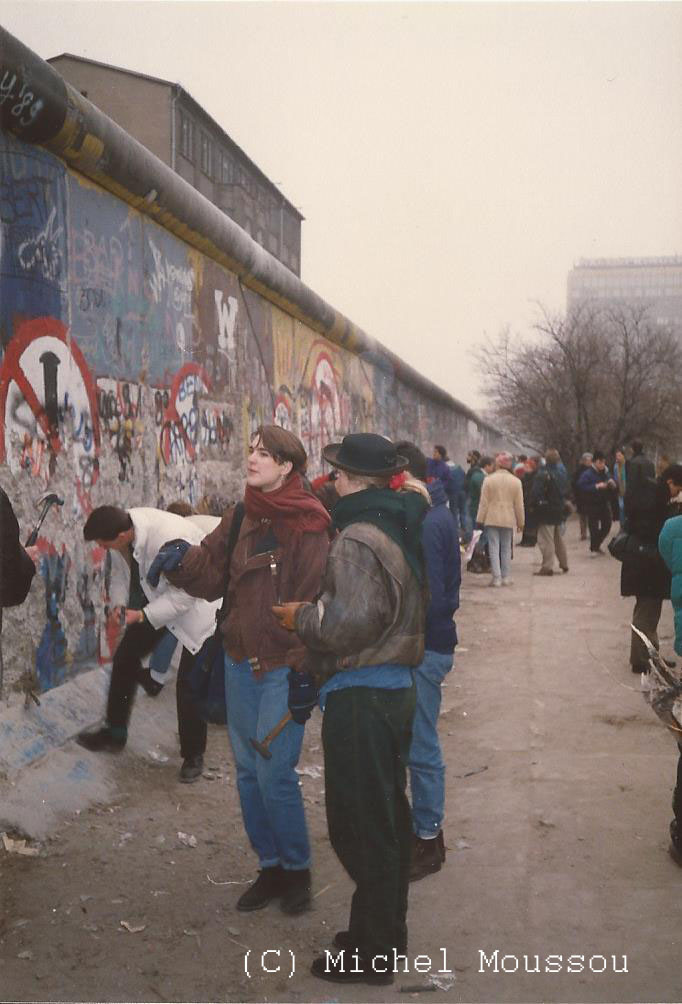 Upon crossing the frontier we encountered a strange sight: Countless people of all ages were diligently pounding away at the wall with hammers of all sizes. Every single one of them seemed determined to contribute physically to the demolition of this hated structure. Dick (as we called Avedon) walked up to the edge of a platform and stood there as if transfixed by the sight and the sound of this percussive pandemonium. "I wish I had a tape recorder!" he muttered, his gaze wandering into the void. Putting pressure onto my arm with his finger to carry his point through, he carried on, "This is the concert of freedom!" We all moved away, allowing him to absorb the bizarre energy of the place. The creative process of the Berlin Series was in full bloom.

East Berlin was always considered more grey and more sinister than its hip western counterpart. The partition of the city in 1945 had allocated to the Soviet sector the Imperial section with the great boulevards, the largest squares and the most important edifices. Depicted as vibrant with energy, traffic and life, by the painter Kirchner and filmmakers such as Max Reihardt, the East Berlin of the 1980s seemed like a shadow of its former self. Its neighborhoods lay desolate for decades, the main arteries seemed devoid of people. Occasionally the appearance of a solitary vehicle, its engine puttering and moaning from poor quality gasoline, would further intensify this feeling of desolation.

It was this ghost-like atmosphere that the photographs would try to capture. The core would be Unter den Linden, the largest boulevard in the world, dotted by monuments and edifices while leading theatrically to the Brandenburg Gate, the timeless symbol of German history, be it Imperial, Third Reich or Cold War.

Extensive reconnaissance walks for the pinpointing of landmarks took place. As rest was necessary we headed for the hotel Metropol, sold-out to the sky. A few minutes later Nicole came triumphantly brandishing the keys of the presidential suite (this was not an ordinary trip!). However, the overall feeling of unease that loomed over East Berlin was hard to shake off. Avedon began explaining to us the difficulty of capturing madness in portraits. Then, exhausted, he dozed off on the couch. 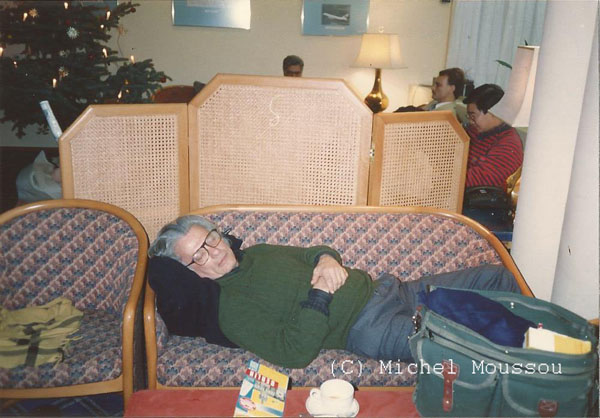 Around eleven at night, people began turning up in Unter den Linden by the thousands. Emotions ran high. This was no ordinary crowd and definitely no ordinary New Year's Eve. There was no anticipation for the stroke of midnight. The feeling was more funerary, with no climactic moment but rather a very strong cathartic process lingering over the vast open space. People were allowing their emotions to be freely expressed. They seemed to be in a state of shock at the nature of the feelings that had been bottled inside them and were rising to the surface.

Facing this sea of visages, Avedon rose to the greatest challenge of his career. The photographer of fashion and celebrity portraits was about to create the collective portrait of a nation at its most heightened emotion. And instinctively he began clicking away. 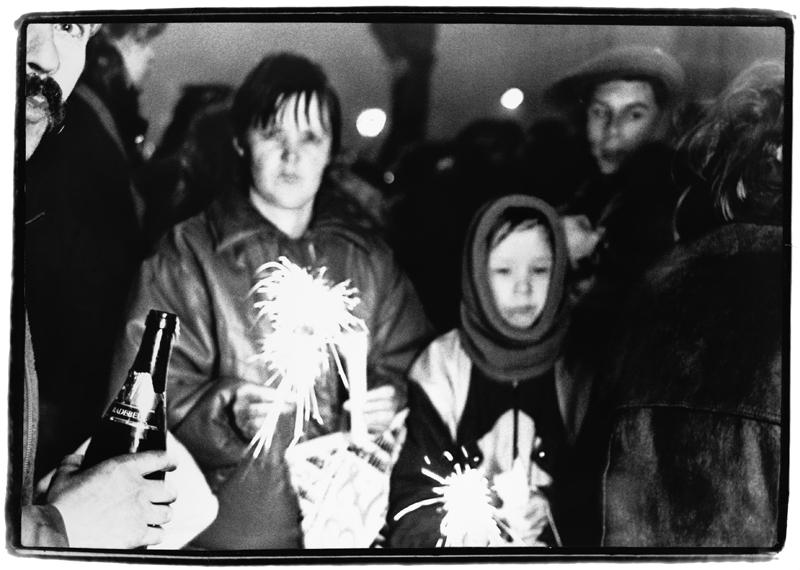 The task of the team was to engage people in conversation. As a true master of drama, Avedon did not aim for the actions but immortalized the people's reactions as they shared with us their feelings of their newly acquired and unexpected freedom.

The joy, the tears, the enthusiasm were the fissures, the real breaches of the wall. The triumph of human feelings over the inhuman nature of a brutal and oppressive regime. When the stroke of midnight came, 1990 ostracized the Iron Curtain to the realm of history. Avedon seized this collective gasp of freedom after a continuous choking period of more than three decades. This he achieved in a single shot: a young man, on top of a pole of Pariser Platz, the dividing line between East and West under the shadow of the Brandenburg Gate, drinking from a bottle after having cried out loud in ecstasy. 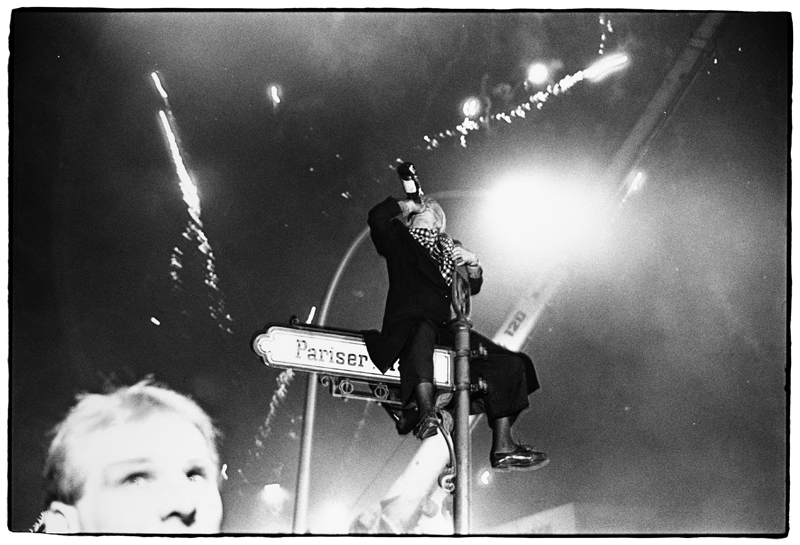 A thousand years from now when history textbooks will allocate to the Cold War a mere couple of paragraphs, the text should be illustrated by one Berlin Wall photograph. For by seizing this singular moment in history, Richard Avedon exposed in the faces of his subjects the stress and the pain behind the wall and the related historical events. And by so exposing them, he made a statement: that such things should never be repeated again.

Radou Michael Moussou has been an elected municipal Councillor for the city of Athens. He is currently the president of the Lycabettus society for the preservation of national patrimony in Athens city of Athens.