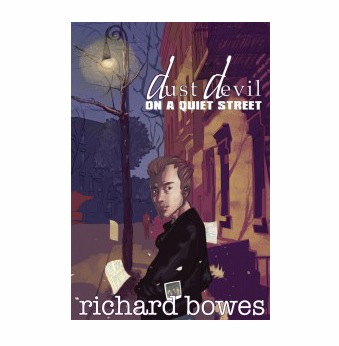 This week I talked with awarding-winning gay author Richard Bowes about his new autobiographical novel, Dust Devil on a Quiet Street, which was just released by Lethe Press. Born in Boston, Richard has lived in Manhattan for almost his entire adult life. Dust Devil on a Quiet Street takes readers on an amazing ride. It's like traveling in a time machine through 50 years of gay life in New York City. Richard shares everything from coming to terms with his sexuality to his struggle with overcoming years of substance abuse. David Pratt, a Lambda Literary Award-winning author, said of the book:

From the Bowery to Times Square, from The Saint to Saint Vincent's, from Sleepy Hollow to Hoboken, Richard Bowes takes us on an eerie, bittersweet, wonderfully nostalgic tour of a slightly bygone (and very haunted!) New York, New York. It's like hanging in West Village bar with a gay Joseph Mitchell or Jimmy Breslin. A delightful read for anyone ever captivated by Gotham, by art, by youth, or by the spirits that lurk within ever-shifting cityscapes.

I talked with Richard about his new book and his spin on LGBT issues. When asked about his personal commitment to LGBT civil rights, Bowes stated:

You know, it used to be easier and clearer. I mean, if you just said, "I am gay," you were doing the work. Now it requires more thought, it requires more action, and it requires a lot more donations. I remember in the early days of gay liberation knowing that I had to march in that parade. People took an enormous risk being in the parade, because there would be pictures, and their dear mother, wherever she was, would see these and realize. That would be their coming out. I always felt because of where I was and because of what I did (I worked in the library at New York University, and nobody there cared if I was gay or straight; I think, in fact, with guys, it was more or less assumed that you were gay), I had an easy life ... and I've tried to remember that and give something to those who are, in my opinion, on the front lines.

Richard Bowes has won two World Fantasy Awards and the Lambda Literary Award, the International Horror Guild Award, and Million Writers Award. By the end of 2013, he will have published six novels, four short-story collections and 70 stories. This year Lethe Press republished his Lambda Literary Award-winning 1999 novel Minions of the Moon. His modern fairytale collection The Queen, the Cambion and Seven Others appeared in March 2013 from Aqueduct Press. A collection of new and old stories, If Angels Fight, will be published by Fairwood Press this October.