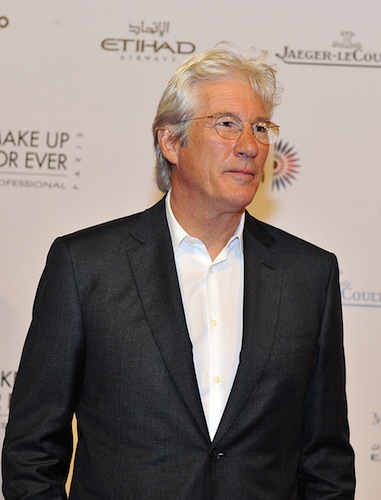 At this year's dazzling Abu Dhabi Film Festival, the celebrity buzz has been deafening. After all, it would be An Officer and a Gentleman himself Richard Gere walking the red carpet on opening night, for the film Arbitrage, which is now playing throughout the Middle East. The festival has done things grand and it felt otherworldly to walk alongside the celebrities on a path that took this movie lover right under the spotlights, cameras and microphones and then threw me in the midst of all the excitement -- from beginning (the film's screening inside the Emirates Palace theater) to end (a dazzling party by the sea where even silver sequins felt underdressed).

Yet for yours truly, the highlight of the evening and the following press day for the film, would be the wisdom I learned watching the classy Gere in action, surrounded by a media frenzy and yet completely at ease among the welcoming atmosphere created by his Gulf fans. Gere in Abu Dhabi embodied a magnetic spokesperson for elegance and culture, and turned out to be a great ambassador for the West in the region.

Non violence does not mean weakness.

At a press conference the day after the red carpet Gere, a practicing Buddhist, fetched his own green tea refill. Not one to order people around, he got up from his seat, walked off the stage with his cup and left us all wondering what exactly was going on. But when asked a provocative question about playing someone from the region by an Arabic-speaking reporter, he quickly cut in, "I'm a totally non-violent person and my commitment is to all beings. I don't pick and choose, I consider everyone my brother and sister."

Producer Mohammed Al Turki is even cooler than he appears. 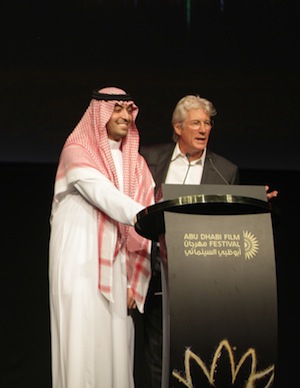 See, for someone like me who watches films for their social impact beyond the sheer entertainment effect, Arbitrage is a groundbreaking project. Beyond its undeniable cinematic appeal, the film holds much promise for the Gulf region, as well as some lessons for the West. The film's producer, Mohammed Al Turki is a Saudi-born, Los Angeles-based, relatively new player in the movie business, yet one who -- at just 26 -- is fast becoming a force to be reckoned with in Hollywood. Al Turki, or "Mo" as his friends call him, walked the red carpet and introduced Arbitrage dressed in a stylish white thawb and red over white Saudi shumagh. In his easy American accent and quite visibly moved by the loud, lengthy applause he received from the audience, he admitted, "I am a son of the Gulf region" and that his dream has always been to "bring Hollywood home." Al Turki is the embodiment of the word "modesty" so admired in this part of the world, and yet so forgotten by the rest. Director Nicholas Jarecki said it best when he raved, "Mo is our link and the reason we are all here."

Taking the stage for the premiere of Arbitrage, both Gere and filmmaker Nicholas Jarecki had prepared some words in Arabic. It was lovely to hear Gere announce, "My Arab brothers and sisters, I feel the heart of Abu Dhabi" and then watch the typically reserved audience light up with excitement in response. In these times when disastrous media headlines and negative stories about the region abound, the few sentences uttered so honestly by Gere were an example of how important a few, true, uttered from the heart diplomatic words can be.

Film is the best weapon.

I can't think of any other medium that reaches as many people around the world. Producer Al Turki shared with me a few days later that "movies are a global language, everyone watches them, everyone has favorites they can share." Whether you grew up in Chicago in the '60s, or Riyadh in the '80s, there undoubtedly were along the way cinematic images that accompanied you throughout your growing pains.

Gere's own intimate admission that he had "finally breathed some air last night, when we escaped from the hotel" shed light into the confines of celebrity-dom. He added that he found the people of Abu Dhabi "culturally profound and with a sense of humor: the kind of people I like" and continued that sometimes he would "love not to be a movie star and see the country." Perhaps something the press could think about the next time they feel the overwhelming need to overstep their boundaries and disturb a celebrity just trying to live life.

The Abu Dhabi Film Festival continues through October 20th and is presented by media and entertainment hub TwoFour54.