So what's the latest buzz on Facebook? Adele versus music rival Miley Cyrus? Donald Trump proudly admitting he hasn't cried since he was a little boy and that he never ever apologizes for anything? 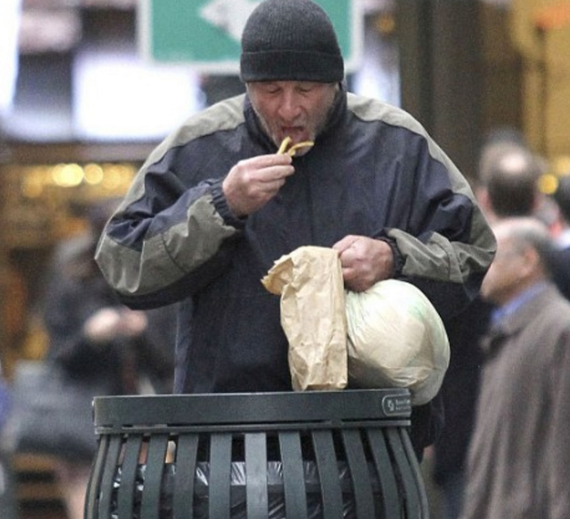 It's a picture of Richard Gere as a homeless man on the streets of New York City.

Co-star Jena Malone posted a shot of a clearly down-and-out Gere sitting on a sidewalk taken from his new movie Time Out of Mind where he plays George, a mentally-challenged homeless man.

Nobody, least of all Gere, expected the furor that quickly erupted. But he obviously relishes the exposure. Not as PR for his film but as PR for an issue he feels passionate about.

A long-time supporter of the New York City Coalition of the Homeless, Gere, along with director Oren Moverman, talked about homelessness in a video designed to start a dialogue with US citizens who were bombarding him with questions about his experience.

"People were actively not seeing me," said Gere in the video. "I began to feel a kind of "outside-inside" view of not being part of the structure [of society] anymore. The best way to describe it was feeling like a black hole of despair ... that people were afraid to engage."

The Black Hole of Survival.

The terrible place of having no shelter, no food, no water, no place to bathe or use the toilet, no respect, no connections and no hope of help -- a place over half a million American find themselves on a daily basis, a place almost 8 million people currently living doubled up with family and friends, crashing on sofas and sleeping in cars, face the first of every month.

Since 2007, the number of poor households in the U.S. where the cost of a roof over head (no matter how leaky) takes 50 percent of their monthly income -- has increased 25 percent.

And, as we approach another brutal winter, millions of families and the elderly, can expect to have their utilities shut off for non-payment.

"I don't think any of us are ultimately that far away from losing it," said Gere. "Especially in the world we're in today.

"Money doesn't go as far as it did. Income inequality is something very very real. ... I think we have to keep our hearts warm to that and see our brothers and sisters who have fallen off the cliff in a different way -- that it's us -- it's us tomorrow maybe."

So how how about creating a different tomorrow?

Back in 1946, Albert Einstein wrote in a telegram that, "A new type of thinking is essential if mankind is to survive and move toward higher levels."

But what kind of "new thinking" did he mean?

American psychologist Dr. Abraham Maslow, one of the founders of transpersonal psychology and the Fourth Force of psychology believed humans evolve through six levels of consciousness.

Bottom level is basic survival thinking where we struggle for air, food, and shelter. Then comes the struggle for safety needs, securing the money to continue securing the basics. Belonging needs -- having family and friends, come next. Then come self-esteem needs where we prove ourselves by acquiring acclaim from others and feel good about ourselves by "keeping up with the Joneses." The fifth level he called self-actualization, the level of optimal ego functioning.

The first five levels of what Maslow termed the Needs Hierarchy are about physical and ego survival, with the motto of the fourth and fifth levels best summed up as: "S/he who dies with the most toys wins."

"Until everyone is free on that level, none of us are."

The astounding reaction to Gere's Facebook picture shows that millions and millions of us agree. We're ready to vault into the sixth level, what Maslow termed transpersonal awareness, where the individual begins to identify with the whole and tend to the needs of the whole.

"There's one universe," Gere said. "And ... we're atoms in this universe and we're all in some bizarre way creating a universe that is complex and extraordinary and intelligent that wants to be alive and function well.

"If we're not good citizens as cells in this organism that organism is going to die. It's just the way it works. We all have to do our part.

A question it's time for each and every one of us to face.