A team of British scientists believe they may have identified the killer blow that killed King Richard III more than 500 years ago--and they were lucky enough to catch their "eureka moment" on camera.

A new video from the University of Leicester in England (see above) shows forensic pathologist Professor Guy Rutty examining the crooked king's skull, and discovering a small lesion inside the cranium directly opposite a large wound at the base of the skull.

Rutty and his colleagues say these wounds suggest that a sword or a staff weapon was shoved into the king's neck, and then through his brain, before nicking the inside of his skull. 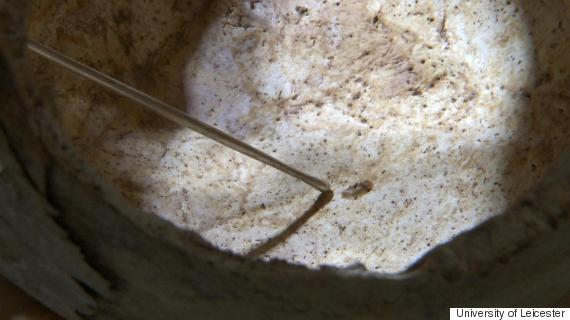 The small nick found inside King Richard III's cranium, which may have resulted from a sword's "killer blow."

"Careful examination showed that the two injuries lined up with one another, and also with an injury to Richard's first cervical vertebra," Dr. Jo Appleby, an osteologist at the university and a researcher involved in the analysis of the skeleton, said in a written statement. "The combination of all three injuries provided evidence for the direction of the injury and also the depth to which the weapon had penetrated the skull."

Using CT scans and other imaging techniques on the skeleton, the researchers identified a total of 11 injuries, including nine to the skull, one to the ribs and one to the pelvis.

The researchers believe the king died fighting at the Battle of Bosworth in 1485 after removing or losing his helmet. An article describing their findings was published online in the journal The Lancet in September 2014.

The king's skeleton was first discovered beneath a parking lot in Leicester in 2012. After analyzing the bones and conducting DNA tests, scientists confirmed the remains belonged to Richard III in 2014. The skeleton is scheduled to be reburied at the Leicester Cathedral in March this year.