This was a close call: archaeologists have discovered that the skeleton of King Richard III was nearly destroyed during some mysterious disturbance at the Grey Friars site in Leicester, England, where the king was buried.

During a second excavation of the site last month, the University of Leicester researchers found that a large area of the church had been destroyed. They revealed the news on the one-year anniversary of their search for the Plantagenet king, which began August 25, 2012.

“It’s a miracle that Richard III’s skeleton was where it was," site director Mathew Morris of the university's archaeological services said in a written statement. "To the east, there is a massive disturbance that has removed all evidence of the church -- which must have come within inches of his head." 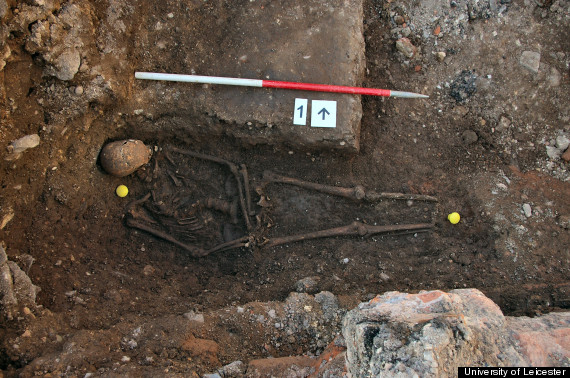 King Richard III in the grave.

The strange disturbance may have been related to the demolition of the Grey Friars church itself, or could have happened after the friary was disbanded, Morris said in the statement.

"Whatever it was, it came very close to removing Richard’s head," he added. “It’s entirely possible that because he was underneath the Victorian outhouses, he was protected from it... We found some pottery remnants in the area, but until we have examined those we won’t have any idea when the disturbance happened.”

It's a good thing the king didn't lose his head since there are future plans to rebury Richard III's remains with honor.