The death of actor Richard LeParmentier, the man who, as Admiral Motti," was choked to death by Darth Vader in "Star Wars," may breathe new life into a meme that was recently inspired by the famous scene.

LeParmentier, 66, died Tuesday while visiting his children in Austin, Tex., just a few weeks after the new meme, "Vadering," caused renewed interest in his work.

The trend, called "Vadering," requires one person to imitate Darth Vader's contact-free chokehold while another jumps in the air and holds his or her throat as if being suffocated telepathically.

The "Vadering" briefly had a chokehold on the Internet a few weeks ago after the first photo depicting the activity showed up on Reddit.

But, like Planking, Tebowing and even Owling, the Vadering craze was fading as quickly as it started, according to Paul Tassi, who wrote about the craze for UnrealityMag.com.

"It was probably done. It takes a lot for a meme to live on," Tassi told The Huffington Post. "But it might catch on again, once people figure out that he died."

WATCH: 'I Find Your Lack Of Faith Disturbing' (Story continues below)

Ben Bizuneh, who did his own Vadering photo, admits that, like others, he had moved on from Vadering to "Pottering," the act of making it look as if you're in the air flying a broom. However, news of LeParmintier's death, may inspire a new passion from Vaderers like himself.

"I'm sure there will be galleries honoring him," Bizunah, who tracks memes as part of his job at Maker Studios, told HuffPost.

LeParmentier was aware of his brief fame earlier this month, after the British newspaper The Metro contacted him about the Vadering meme. He was quick to warn others that the activity can be a literal pain in the neck.

"I did the choking effect by flexing muscles in my neck. It set off a chain of events, that choking," he said, according to the Metro. "I can’t do it anymore because, oddly enough, I have had an operation on my neck and had some 21st century titanium joints put into it."

PHOTO GALLERY
The Best Of 'Vadering' (So Far) 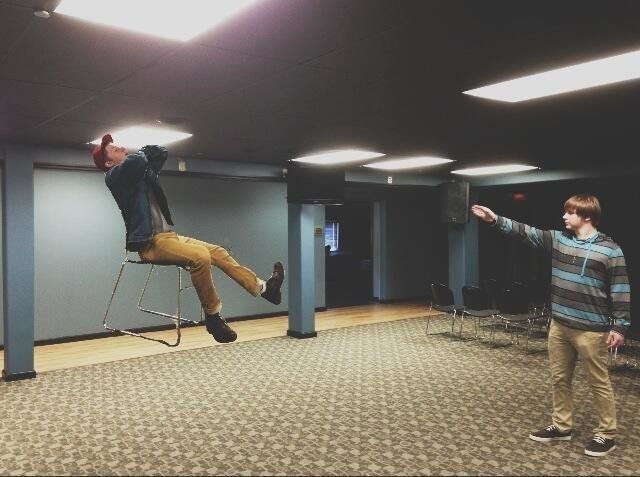