Twenty-two years have past since Richard Linklater burst on the indie film scene with "Slacker," but the director is still happy to work outside of mainstream Hollywood. In fact, he prefers it stay that way.

"If you make a film with someone, maybe they don't like it or they're looking for reasons not to like it. They're like, 'Oh, it didn't turn out the way we thought,'" Linklater told HuffPost Entertainment. "That's kind of my history: You do a film with someone and they kind of glass-half-empty it. 'Here's what it's not. Forget what it is; we're going to focus on that.'"

Linklater had no such concerns on his latest film, "Before Midnight." Set nine years after "Before Sunset" -- which itself was set nine years after "Before Sunrise" -- "Before Midnight" reunites Linklater with Ethan Hawke and Julie Delpy for another talky romance about love and life in the world of Jesse (Hawke) and Celine (Delpy). Linklater co-wrote the film with the two stars, and was able to finance the feature independently. The gambit paid off: "Before Midnight" has won raves on the festival circuit this year and has a near-perfect score on Rotten Tomatoes.

Ahead of the film's May 24 limited release, Linklater, 52, spoke to HuffPost Entertainment about the indie franchise's studio origins, how he was able to shoot one of the most intense sequences of 2013 and why "Before Midnight" is even larger in scope than its two predecessors.

(WARNING: Some slight spoilers about the plot of "Before Midnight" are discussed below.)

It's hard to believe that when "Before Sunrise" came out in 1995, it was a studio production. It is a statement of how the industry has changed. Nineteen years ago when we were headed off to Vienna to do that, we were financed from Columbia Pictures through Castlerock with a $2.7 million budget. The fact that a studio would even bother with something like that now is just laughable. Nine years later, we were at Warner Independent, which is the indie division of a studio. Same $2.7 million budget, by the way, nine years later, but it was kind of an industry indie. Now, we were completely equity financed. We didn't have any industry connection in the financing of this movie whatsoever. Ultimately, Sony picked it up to distribute.

Are you shocked how much the industry has changed? Not really. In its current form, of course, it has changed so much. What happened somewhere along the way -- and I lived through this, because I got films like this made; "Dazed and Confused" was done at Universal -- studios figured out what they weren't doing, what they were doing, what they did best and what made sense for their shareholders and bottom lines. They've figured out these bigger films are the smartest investment of their time and energies. That's freed things up. You used to spend a lot of time trying to get studios to say yes or no. Now, you don't even take certain kinds of films to the industry. I don't waste anyone's time saying, "I have this small film about this." You don't even bother them with it because you know they're not going to be interested. It's not their business. There are a couple of different businesses here within the realm of film.

When you decided to make "Before Midnight," who did you call first: Ethan or Julie? We're all in conversation. We talk about it. Two years ago, we got together in New York and started talking about what this could be. We've done this twice now, where we don't have any ideas for six or seven years and then it's sort of like, "You know, what about? ..." Then the ideas get more substantial. What's going on is that everyone has lived another six or seven years of life and we can imagine Jesse and Celine at some new station in life. So, we spend a year or so talking about it and go down these paths of what it could be. Maybe we'll go down one path for six months and then change it. We learn a lot every step of the way.

Was there more pressure this time since "Before Sunset" was so well received? Not so much pressure from the way "Before Midnight" would be received, but from the expectations. The fact that we had done a second one, it was sort of like, "Oh, are you going to do another one?" Especially the way that one ended. "Oh, what happens next?" It was kind of a cliffhanger. The first film didn't have that at all; no one was clamoring for a sequel. The second one, however, we've all had to answer for it over the years since. Like, "Are Jesse and Celine ever going to be together?" I do Q&As about other films I'm doing, and maybe the last question is, "If you don't mind me asking, I was just wondering if Jesse and Celine are ever going to ..." And I'll have to go, "Well, I don't know." As we got closer, however -- when I was doing Q&As for "Bernie" just a little more than a year ago -- I was getting that question and we did have an outline. My answer changed to "I wouldn't be surprised if they showed up again."

Shortly after the film opens, there's this long, uninterrupted take with Jesse and Celine driving in a car with their two children in the back. It ends up being one of the most tension-filled sequences of the year because of those kids. I kept waiting for them to wake up and blow the moment. They're the unsung heroes. There are four actors in that scene, and two of them are these little girls in the back pretending to be asleep. [Actresses Charlotte and Jennifer Prior play the twins.] They're not really asleep; they're keeping their eyes shut and they're even kind of fake waking up. It's kind of a great performance. Then, boom, 13-plus minutes in, they nail their two lines. It's kind of amazing.

It's incredible. How much rehearsal did that take? Lots of rehearsal. Not so much with the kids. Ethan and Julie were working on that for months. The kids we incorporated as we got closer to shooting. Maybe a week or two before was when we started working with them. They were very calm, well-mannered little girls. I have girls roughly their age and they could never have done that! They would look at the camera. Three minutes in and they would have been completely bored and unable to keep their eyes shut. It's really a stunning child performance. I've directed a lot of kids and I'm most impressed with what they did there.

When you were writing the script, did you always know that sequence would occur in one take? That was always my intention. Ethan and Julie know me well enough at this point to go, "OK, he's going to want to do this in one take." Early in the movie, this is the illusion we're creating: The ideal would be to drop a viewer in on Jesse and Celine's reality. If you can have a take play out like that -- long -- viewers have to accept this as real on some unconscious level. These are real people and we're in their real world and this is their reality. That scene provided a lot of backstory. Those nine years disappear in that scene. If you know the movies, it's like you're hanging out with old friends; if you don't -- and this film stands alone -- you learn a lot about these two people in some very realistic way.

In my mind, Ethan is one of the most underrated actors in Hollywood ... He can do anything. He can be a big comedic actor; I would put him in the next Vince Vaughn-Owen Wilson movie. He could do that. I think because he does so much theater -- he's in Chekhov, he's in Shakespeare -- people think he's one of those serious New York actors. He could do anything. He's so versatile and so smart. But, you know, a good-looking guy who's popular -- no one is going to say, "You're a really good actor, bud!"

That's what they say about an actor like Brad Pitt; he won't win awards because he's too handsome. You look how long it took Paul Newman to win an award. He had to be an old man. Even Brad Pitt, as good as he is -- you might get a nomination now and then, but you're not going to get [an award]. People don't want to reward that. "It looks effortless, you're too smooth." They figure you're wealthy, you're getting laid, screw you. It's just the dynamic of our culture.

I feel like both Ethan and Julie have gotten better as actors as they've gotten older. Is that fun for you as the director, to know you can do things with them that maybe you weren't able to on "Before Sunrise"? Yeah! There's been an evolution. Our high-wire act has gotten bigger because I know what they can do. I can push them a little further than I did the second time, which was a little further than I did the first time. I just know we can get there. It's going to be hard work, but they can do it. I know their abilities. Not every actor can do what's required in this film. In fact, very few probably could. Every actor has strengths and weaknesses, but this just really plays to their strengths and what they can do.

Have you ever given thought of writing something that wasn't related to Jesse and Celine with Ethan and Julie? That would be an interesting exercise for us. To write together and not be Jesse and Celine and just be something else. I don't know what that would be to pull us together; we're all so busy with other things. That would be kind of fun. We're going to write an action-thriller together! We could do it. 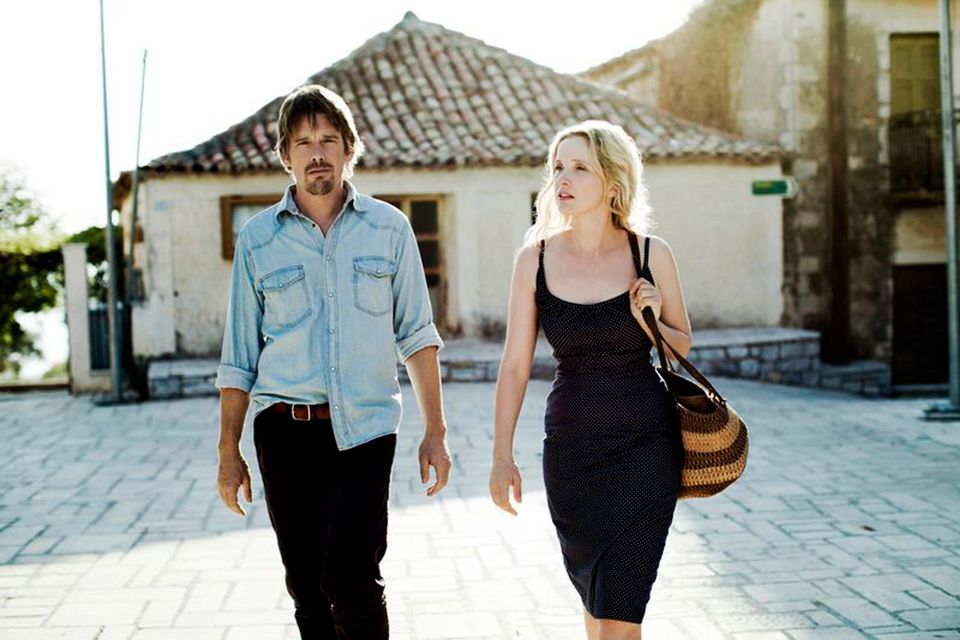