The nearly three-week manhunt for the two escaped killers intensified around 1:51 p.m., when a 911 operator received a call from a motorist who found a bullet in a camper that was being towed, Cuomo said Friday night at a state police barracks in the village of Malone.

Law enforcement swooped in and detected the odor of gunpowder in a nearby cabin, State Police Superintendent Joseph D'Amico said at the press conference. They followed Matt, one of the two killers who escaped a maximum security prison on June 5, through a wooded area and fired at him when he ignored orders to put up his hands, D'Amico said.

Matt had a 20-gauge shotgun with him, though he didn't fire at police, D'Amico said.

“You never want to see anyone lose their life, but I want to remind people that Mr. Matt is an escaped murderer from a state prison. He killed two people that we know about,” Cuomo said. “These are dangerous, dangerous men.“

Officers continued to search a nearby wooded area for Sweat, who escaped with Matt. Cuomo said the two were assumed to have been together on Friday. "There are several leads that are being tracked down as we speak about Mr. Sweat," he said.

"Matt has been shot, he's down," Lenny DePaul, a former U.S. marshal, told CNN. "Apparently he's been hit. Not sure what his status is at this point."

Earlier Friday, police said they believed the men were on their way to Canada.

Authorities received more than 2,000 tips in the case, according to the New York State Police. More than 800 law enforcement officers from state, local and federal agencies joined the search within its first week.

Acting on the tips, law enforcement canvassed different parts of northern New York for almost three weeks, following leads across state lines to Vermont and along the Pennsylvania border, before zeroing in on the convicts near Malone.

A major break in the case came earlier this week when authorities found the convicts' DNA in a burglarized hunting cabin in Franklin County. 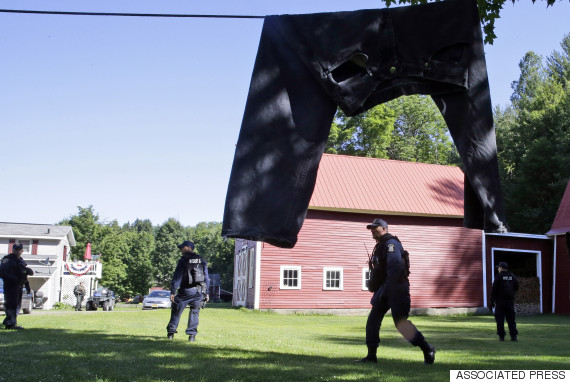 The two convicted murderers used power tools and worked their way through a series of catwalks and tunnels to escape from the maximum security prison.

Investigators determined that the escapees obtained the tools with the help of accomplices inside the prison. Several prison employees were questioned following the breakout, and two were ultimately charged with aiding in their escape.

Prosecutors charged Joyce Mitchell, the supervisor of an inmate training program, on June 12 with promoting prison contraband and facilitating the inmates' escape.

Authorities accused Mitchell of concealing tools such as hacksaw blades and screwdriver bits inside frozen hamburger meat and smuggling them into the prison. Sweat and Matt lived in the prison's honor block, which afforded them the privilege of cooking their own meals. 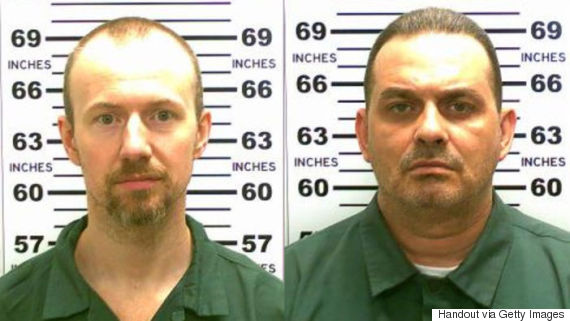 Prosecutors said the meat containing the tools were taken to Matt and Sweat by a corrections officer, Gene Palmer, 57. Palmer also allegedly gave the inmates pliers and a screwdriver in exchange for paintings they'd made, according to court documents. He was charged June 24 with promoting prison contraband, tampering with physical evidence and official misconduct.

A law enforcement source told CNN that Mitchell admitted she was supposed to have been the convicts' getaway driver, but had abandoned those plans in a last-minute change of heart.

In an NBC interview that aired June 23, Mitchell's husband, Lyle, said that his wife told Matt she wanted to back out. Matt responded by threatening to have someone harm or kill her husband.

"She said she loved me but she was in too deep," Lyle Mitchell said.

Matt was serving a sentence of 25 years to life for the kidnapping and beating death of his boss on Dec. 3, 1997.

Sweat was serving a sentence of life without parole for the shooting death of a Broome County sheriff's deputy on July 4, 2002.

The chief of detectives who investigated Matt in the murder of his former boss described him to The New York Times as "the most vicious, evil person [he'd] ever come across in 38 years as a police officer."

"These guys could con the devil out of hell," a veteran state correction officer said of the escaped inmates.