MARTINEZ, Calif. -- A police officer who fatally shot an unarmed man during a struggle said Wednesday he feared the man "was going to take my gun and kill me."

Richmond Officer Wallace Jensen, testifying for the first time since he shot Richard ‘Pedie” Perez III, 24, outside a liquor store in September, said he saw Perez' hand on his gun, so he fought him off and opened fire.

“My concern was Mr. Perez would take my gun,” said Jensen, a canine officer, explaining why he fired three rounds at Perez.

Wednesday's Contra Costa County coroner’s inquest was largely a formality to determine the manner and mode of Perez’s death. It has no legal bearing on whether Jensen is charged, but it provided revelations about the ongoing investigation.

The Sept. 14 altercation began when Jensen, a seven-year veteran, cruised by Uncle Sam’s Liquors, where he said loitering had been a problem. A clerk called out that Perez, a customer, was “causing problems” inside the store.

Jensen said he ordered him to sit down outside the store.

“I could tell he was unsteady. He swayed from side to side. His speech was slurred,” said Jensen, wearing a dark suit and yellow tie. “He was very talkative. He kept talking. He was animated with his hands.” A pathologist testified Perez had a high blood-alcohol level.

While Jensen tried to contact another officer on police radio, he said Perez got up and walked away, even though the officer said he had told Perez he was not free to go.

“Fuck this. I’m out of here,” Jensen said he recalled Perez saying. 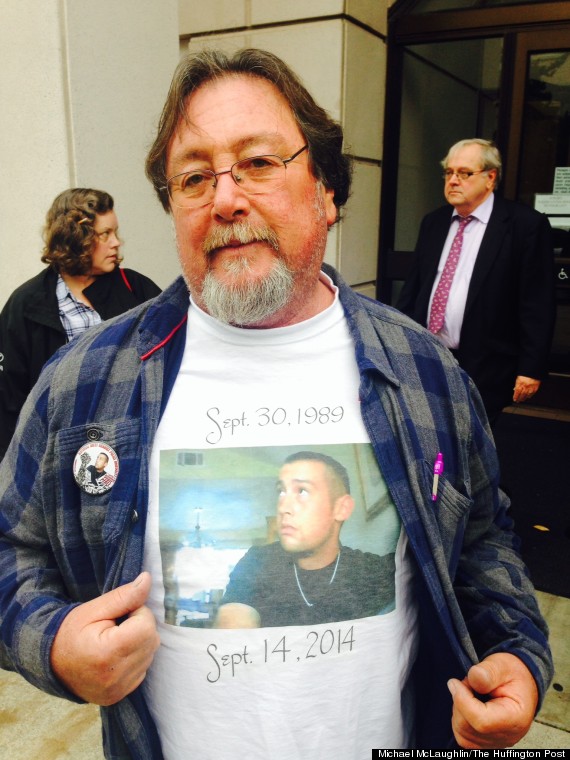 Perez's father Rick Perez with a T-shirt honoring his son outside court in Martinez, Calif.

Jensen grabbed Perez from behind and swept out his legs, knocking him to the ground, he said. Perez got back to his feet. The officer said he radioed for backup and knocked Perez down again, this time from the front with something like a “judo throw.”

“I was telling him to stop resisting, to stop fighting, that he was under arrest,” Jensen said. “I related that over and over.”

With Perez fighting back from the ground, “I felt something began pulling on my gun. I felt several pulls,” Jensen testified. “I saw Mr. Perez’s left hand on my gun.”

“My concern was Mr. Perez would take my gun,” Jensen said.

He said he fired the first shot when Perez “advanced” toward him, and two more rounds as Perez continued coming.

Perez grabbed his chest and doubled over, then stumbled into the liquor store and collapsed, according to Jensen.

Hearing officer Matthew Guichard presided over the inquest and was the only person to question witnesses. An attorney for Perez’s family later complained that the questioning was not vigorous.

The inquest began with a pathologist describing Perez’s autopsy.

Two of the three bullets that hit Perez were fatal, according to Dr. Arnold Josselson. One tore through his lungs and aorta. The other hit his left lung, spleen and liver. Bruises and abrasions on Perez’s body were “consistent with a physical altercation,” Josselson said.

Perez had a blood alcohol level of 0.247, according to Josselson. That's about three times the legal limit to drive. There were several medications in his system, but Josselson testified the levels were so low he didn’t think Perez had abused the drugs.

A Richmond detective investigating the shooting testified that the liquor store’s cameras and a witness with a cellphone camera recorded glimpses of the struggle.

The footage, which was not played in court, showed “Mr. Perez with his hand around” Jensen’s belt, according to Detective Hector Esparza.

Esparza testified Perez’s previous run-ins with the law included an arrest on DUI charges the night before he died. He was convicted of DUI last year and was once arrested on a gun charge that did not lead to a conviction, Esparza said.

The rap sheet was “not significant,” according to Esparza, but there was a “pattern beginning to form.”

Hearsay testimony is permitted in inquests, and Esparza said an aunt of Perez told police that “when he drank, he would lose his temper,” and that he expected to die by age 25 at the hands of a police officer.

Other family members, speaking outside of court, said the aunt had misinterpreted a conversation she overhead Perez had with a woman.

The jury still unanimously decided in about 20 minutes that Perez died “at the hand of another person, other than by accident.” The other options were natural causes, suicide or accident.

Family and friends of Perez wept and rejoiced after the verdict. Several wore white T-shirts with Perez’s picture on front and the words “Justice for Pedie” on the back.

Attorney John Burris (left) spoke to Perez's family and friends outside of court on Dec. 10.

“What else could they have come back with,” said Perez’s father, Rick Perez. He said he was bothered by “one-sided” testimony about his son. “He was never violent. He was happy-go-lucky.”

His son, the only child of he and his wife, had worked for him in the family’s paper recycling business in Richmond.

The shooting of Perez comes at a time when national attention is on police conduct in the killing of unarmed men by officers in Ferguson, Missouri, and Staten Island, New York.

But even in the San Francisco Bay Area, where demonstrations have become a nightly disturbance in Berkeley and Oakland, Perez’s case is below the radar.

“It’s a unique time in our country,” said John Burris, an attorney for Perez’s family. He said he plans to file a federal wrongful death lawsuit. “The object is to turn that into something positive.”

Richmond Police Chief Chris Magnus has been empathetic to complaints about police shootings. At a protest on Dec. 9 he carried a sign saying “#blacklivesmatter,” according to the Contra Costa Times.

In a statement to HuffPost, Magnus said:

“Because today’s inquest was open to the public, it was a good source of accurate, factual information and it reflected the findings of the various disciplines involved…The department continues to view this incident as a tragedy and we appreciate that the Perez family is still grieving.  We remain committed to providing as much information to the family and the public as we can legally disclose.”