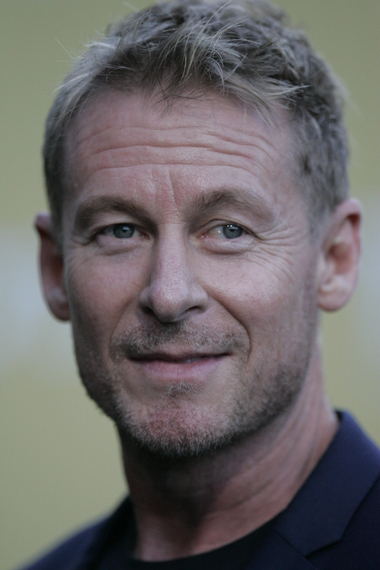 Aussie star Richard Roxburgh welcomed me to his dressing room at the Barrymore Theatre on a Thursday before his nightly performance in The Present, in which he shares the stage with his longtime friend Cate Blanchett, whose husband Andrew Upton wrote the play, adapting it after Anton Chekhov's Platonov. Rugged and handsome, Richard has a quiet confidence and sense of calm about him that makes him easy to be around. After sharing recommendations for ramen noodle and ear, nose and throat doctors (he just got over a cold himself), we took a seat on the couch and dived into talking about his debut Broadway performance in The Present.

This is not your first play by a longshot, but it is your Broadway debut. How are you feeling about it?
Very excited. The experience of doing this play the very first time in Sydney was so unusual and effervescent and genuinely fun in the way that very good material is. You feel that you can constantly keep mining it, tweaking it, and John [Crowley] has been doing a lot of reworking, rediscovering and changing stuff for Broadway. So we've been working a lot on it.

Your character, Mikhail, is such a complex character.
He goes to a lot of places. And there is a lot of fun there, and a lot of existential borrowing thru Act 3 that gets to the emotional bedrock of the play which is so beautifully done. It's fun, and it's also exhausting to do.

What part of Mikhail do you relate to?
Laughs. Well, purportedly, Andrew [Upton] wrote it with me in mind. 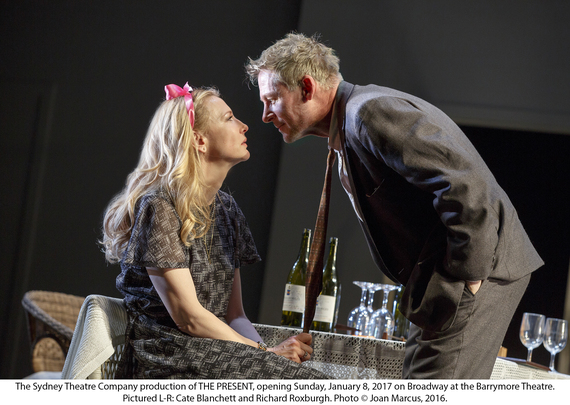 Oh really! Were you a single playboy back in the day?
I've had my moments. Look, I think he wrote it for other reasons possibly apart from just that. But I relate to a lot of it; I understand it on a deep plane. And being able to play that every night with Cate [Blanchett], having that long and beautiful relationship with her, adds a whole other dimension to it.

When did you first meet Cate?
When she was in Ophelia in a production of Hamlet in Sydney. So that was the first time we worked together, and she shook me every night with where she was prepared to go to. Ophelia is not a big role but what she brought to it was a well of suffering that was well beyond her years, and you would wonder where that came from and what else there was. And, of course, we've worked together a lot since then.

The meaning of the play is open to interpretation. I was wondering what the meaning of the show is for you?
The play concerns itself so much with the incredibly illusive matter of trying to be precisely where you are, with honesty, in this life. The incredible difficulty of that. And once you tackle that to the ground and you've got it, it can evaporate in front of your eyes. The question is how do you try and keep ahold of that thing. It's so bewilderingly swift in its movement and shimmering and elusive and you can get attracted to all of the paraphernalia in life but the substance, the "why", is the incredibly elusive thing. And Mikhail optimistically comes to some measure of that by Act 4. Without giving away plots, Mikhail is released by saying "here it is - it doesn't matter what the repercussions are because I'm going to speak the truth".

Your character is on a search for happiness and fulfillment throughout the play. What gives you fulfillment in your own life?
I look to a lot of different things for my fulfillment. I rely very strongly on my life with my family for my fulfillment. I hate being away from them; I can struggle when I'm away from them. When our family is all together I have a great sense of completeness. In terms of work, what gives me fulfillment is a lot of variation. Whether it's producing or working on my series Rake that I'm also the creator or this new series that I'm looking to direct, or doing other things like the children's novel that I published this year called Artie and the Grime Wave. 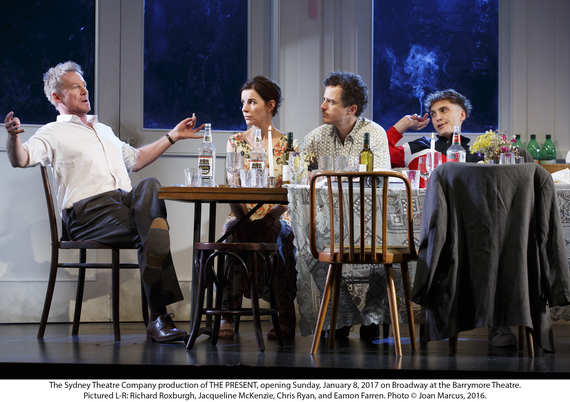 You definitely have a very diverse resume! Do you have a favorite job?
I suppose acting is really my great love, and I suppose in particular theater acting. There's something about it, the immediacy of it, of trying to get that "thing". You aren't working to make something perfect. You are trying to be absolutely present in every little shadow, every single moment.

You moved here from Australia in order to do the play. How's it been living in New York City?
My apartment is opposite the Rockefeller Center and in December we walked out every day into a stadium of humanity. I used to walk to work on the road with the vehicles every night because there was no other way!

Your wife, Silvia Colloca, is a chef. Are you any good in the kitchen?
I used to fancy my skills in the kitchen but it's either that I've been sidelined or I got lazy. The kids like my lasagna; I think I may have the edge on my wife on the lasagna. And I cook Japanese food, as well.

What's one thing you would like to tell your 15-year-old self?
I guess I'd like to tell him that everything will be alright. I think I used to beat myself up a lot. It was a strange thing growing up in the Bush and not fitting in to any of the familial paradigms. I am the youngest of six kids, and a lot of my family have become scientists. So I was a real anomaly, difficult for my parents to figure out. Hard for my teachers to figure out. And I was a pain in the ass in school, lippy, because I had nowhere to put my energy. But when I did a production of Death of a Salesman in high school and played Willy Loman, that's when I decided that this is what I wanted to do.

And aren't we grateful that he did.

Get tickets to Broadway's The Present here.