When we think about the most powerful women in America, names like Oprah Winfrey, Janet Yellen, and Sheryl Sandberg come to mind. But measure sheerly by the size of their bank accounts, and a different group of women top the charts.

This map from the real estate blog Movoto displays the net worth of the richest female resident in each U.S. state. Darker shades of blue reflect those at the richest end of the wealth spectrum. Darker reds correlate with lesser net worth. Lighter shades of both indicate something closer to the middle. 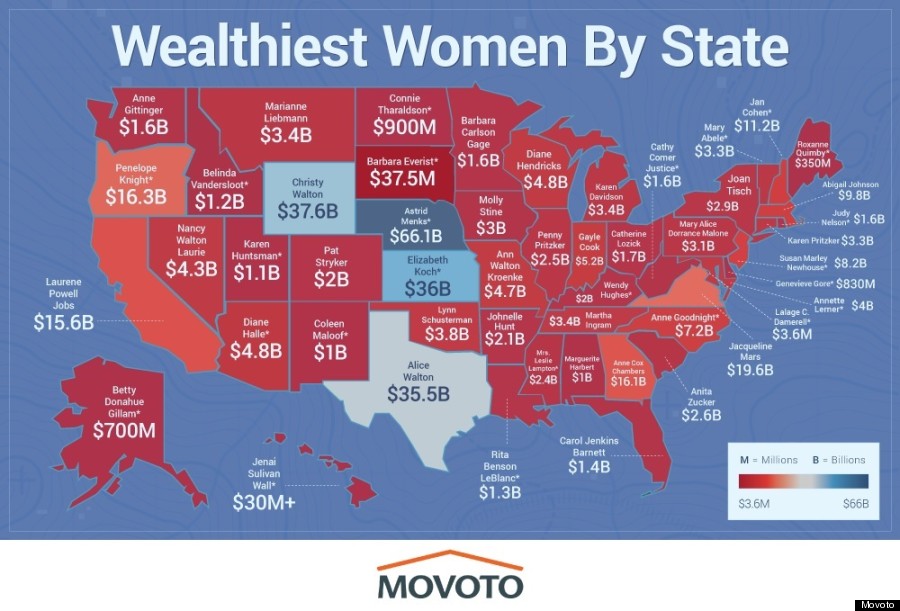 (*An asterisk indicates totals that are estimated based on a family or couple's combined wealth.)

In total, these 50 women are worth more than $200 billion. Some have accrued their fortunes through entrepreneurship, like Indiana's Gayle Cook, the co-founder of Cook Group, a medical device company. Others have garnered their riches via inheritance, like New York's Joan Tisch, heir to the Tisch family fortune.

Four members of the Walton family, Christy, Alice, Ann and Nancy, top their respective states. They alone are worth a combined $81.4 billion. Women involved with Disney, Apple, Koch Industries, and Cargill are also represented. If you're interested in finding out the wealthiest person in each state irrespective of gender, click here.