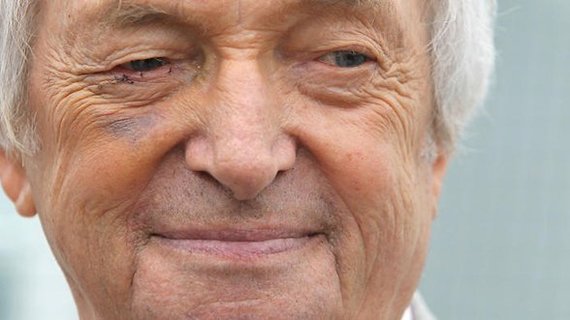 Imitation, so they say, is the sincerest form of flattery. In some notable cases, imitation morphs into mimicry and simultaneously, flattery yields to full-scale admiration. That being so, former Australian cricket captain and the sport's most famous television commentator Richie Benaud, who died in Sydney last week aged 84, was a much admired man.

Throughout his 50 years on television, following an impressive career as a player, Benaud's urbane and measured delivery, along with his perfectly coiffed silver hair and tan that contrasted perfectly with a signature off-white blazer, inspired much mirth and impersonation. Australian comic performer and writer Billy Birmingham, better known as the "12th Man," perfected the "Benaud" better than most through the 1980s and 1990s, making a lot of money doing so. Indeed,
The Guardian's obituary
of Benaud quoted Birmingham as saying his success in "doing" Benaud put his kids through school.

What follows is a 2009 video of Birmingham explaining how to perfect a Benaud imitation ahead of yet another Aussie summer of cricket.

Satire "Down Under" can be savage and unsubtle, Australians being prone to wanting to take down a peg any individual who dares to be, well, individual. The tall poppy syndrome can seem at times like a national malaise.

Nonetheless, with Benaud, the ribbing was almost always affectionate. In early 2014, as the Australian cricket team put England to the sword in an international series of five-day international matches known as "tests," a group of spectators populated a section of the Sydney Cricket Ground, resplendent in silver wigs, cream colored jackets and giant foam microphones, creating a "sea of Richies." It was an amusing and heartfelt tribute to a man who had held the public's attention with a distinct broadcasting style that spanned six decades.

Benaud stood apart from his colleagues behind the microphone, not just in terms of sartorial elegance. As with most sports around the world, professionally trained commentators with journalism backgrounds have slowly given way as television networks court former players for their insights. Whilst some make the transition and become entertaining and fearless observers, most check whatever flare they demonstrated on the field at the commentary box door. Their contributions tend to range from labored anecdotes, delivered in a euphemistic style amid sniggering in the background by former teammates in on the joke, to breathless hyperbole where not a moment can pass without some attempt to fabricate excitement. In this subtlest of contests, where intrigue comes in a variety of guises, and fortunes of teams and players can turn on a dime, viewers don't need contrived drama; they need articulate insight. Less is almost always more.

This was never lost on Richie Benaud. Despite having been a top-level player himself, he had also worked as a reporter for a Sydney newspaper while still playing professionally. He had learned to craft words with economy to convey a picture, a skill he expanded upon when he started commentating on Britain's BBC in the early 1960s. It showed throughout his time in front of the camera. His delivery was sparing, offered calmly with dry wit permeating shrewd observation. Where his peers are anxious to make grandiose pronouncements lest they be perceived as boring and old-school, Benaud almost made an art form out of the silence between his utterances. He was a master of understatement. He is famously quoted as telling fellow commentators: "Put your brain into gear and if you can add to what's on the screen then do it, otherwise shut up."

Nonetheless, he wasn't afraid to give both barrels when he felt it needed. Below is his unconcealed outrage following one of cricket's most infamous incidents, a game between Australia and New Zealand in 1981, in which Australian captain Greg Chappell had just instructed his brother Trevor to bowl underarm on the last ball of the match. Greg's directive ensured that New Zealand batsman Brian McKechnie could not hit the ball over the fence to get the required six runs to tie the game.

Cricket has for much of its 500 years of chronicled existence been a byword for decency and sportsmanship of the highest ideals, where deviating from the spirit as well as the letter of the law is unthinkable. Benaud clearly took the sullying of the game's reputation personally as he calmly but forcefully made his displeasure known.

So renowned for such a long period was he as a commentator throughout the cricketing world (that is England and her former colonies including Australia, New Zealand, Jamaica, Barbados, India and Pakistan) that it is easy to forget Benaud's accomplishments as a player. In an article last week following his death, one of Australia's finest cricket writers, Greg Baum, recalled in Melbourne's The Age newspaper the story of a 12-year old boy, having just got Benaud's autograph, asked: "Did you ever play cricket for Australia, Mr Benaud?" At that point, he had admittedly been retired from professional cricket for 18 years. But it underscored how his on-screen persona often overshadowed a significant contribution on the field.

Benaud played 63 test matches for Australia between 1952 and 1964, scoring 2,201 runs and taking 248 wickets. He was what is known as an "all-rounder"; that is, he was capable both as a batsman and a bowler (baseball fans, a bowler is like a pitcher, only he can't bend his arm when he delivers the ball and he runs in to deliver, rather than from a stationary position).

He is widely regarded as one of the best, if not the best, captain Australia has ever had. And, perhaps in keeping with his dress sense, his leadership was characterized by a subtle flamboyance, imbued with a sense of daring that won the hearts and minds of cricket followers not only in Australia, but across the cricketing diaspora.

He took the game, floundering in the late 1950s in his home country and helped make it exciting again, declaring that he would get rid of "dull" cricket. If he'd been in charge half a century later, the media would've declared he'd brought sexy back to cricket. It is difficult to say what Benaud's reaction might have been to such an accolade, but a raised eyebrow in bemusement was probably the most demonstrative he'd have become.

It is perhaps no coincidence then, that Benaud was at the helm in 1961 when Australia and the West Indies played in the first "tied" test match in Brisbane. A tie, as distinct from a draw, occurs when scores are level at the conclusion of the second innings of the side batting second. Ties are rare: In almost 140 years of test cricket, there have been two. Notwithstanding the fact that there is no winner in such a contest, the match is still considered to be a showpiece of the game, and one of he most exciting games ever played.

It has been intriguing this week to watch the reaction to Benaud's death. Predictably there was a fine body of obituaries in newspapers from London to Lahore, and Melbourne to Manchester. Australian Prime Minister Tony Abbott offered his family a state funeral, which was declined. Somewhat less expected was an obituary in the New York Times. Notwithstanding that publication's worldly outlook, cricket doesn't play a prominent role in American sporting life and such esteem for Australians is usually reserved for departed former Prime Ministers. The commemoration of Benaud's life by the Times reflected not only the universal admiration and respect felt for him, but also the impact he had on Australian culture and sporting life in general.

With his droll delivery and undemonstrative demeanor he seemed an unlikely candidate to have a catchphrase. He almost certainly never intended to have one and probably would have been aghast at the idea. Yet for many Richie Benaud's on-screen persona is encapsulated in a single phrase.

Typically, it was succinct -- a single word: "Marvelous."

By David Saunders, Sports Editor at, The Good Men Project