As the NFL investigates allegations of bullying and hazing in the Miami Dolphins locker room, offensive lineman Richie Incognito continues to be supported by teammates despite reportedly sending threatening text and voice messages that included racial slurs to teammate Jonathan Martin. A second-year player out of Stanford, Martin abruptly left the team last week to reportedly deal with emotional issues. Incognito, once voted the NFL's dirtiest player, has subsequently been suspended by the team for his possible mistreatment of Martin.

Citing an off-camera conversation with Dolphins center Mike Pouncey, Hall of Fame wide receiver and ESPN analyst Cris Carter reported on Wednesday that players in the Miami locker room do not consider Incognito, who is white, to be racist despite him reportedly referring to Martin, who is bi-racial, as a "half n----- piece of (expletive)" in a voicemail.

"They don't feel as if he's a racist, they don't feel as if he picked on Jonathan repeatedly and bullied him, but if they could do it all over again there would be situations that they might change but they’re very, very comfortable with Richie,” Carter reported on Wednesday, via the Sun Sentinel. “They think it’s sad, not only that Jonathan’s not on the football team, but also that Richie is being depicted as a bigot and as a racist.”

Having spoken with an unnamed player who left the Dolphins during the offseason, Armando Salguero of the Miami Herald reported on Wednesday that the players in the Miami locker room not only didn't view Incognito as a racist but actually considered him an "honorary black guy."

"Richie is honarary," the unnamed player told Salguero on Wednesday. "I don't expect you to understand because you're not black. But being a black guy, being a brother is more than just about skin color. It's about how you carry yourself. How you play. Where you come from. What you've experienced. A lot of things."

Perhaps providing an example of the behavior his teammates tolerated, Incognito can be heard using the N-word, loudly, in a video of a bizarre scene at a bar earlier this year with Pouncey obtained by TMZ.

During an appearance on The Dan Patrick Show on Wednesday, Hall of Fame defensive tackle Warren Sapp told Patrick that Incognito used the N-word during an on-field confrontation between the two.

"One time he kicks me in a game and calls me the N-word," Sapp told Patrick. "And I look at him and I said, 'Oh, you want me to punch you in the mouth so they kick me out the game.' I said, 'I got a better plan for you: I'm going to beat your quarterback up so they cut your ass.'"

That Incognito would have used the N-word in an attempt to provoke Sapp would seem in line with reported behavior that led Martin to leave the team. 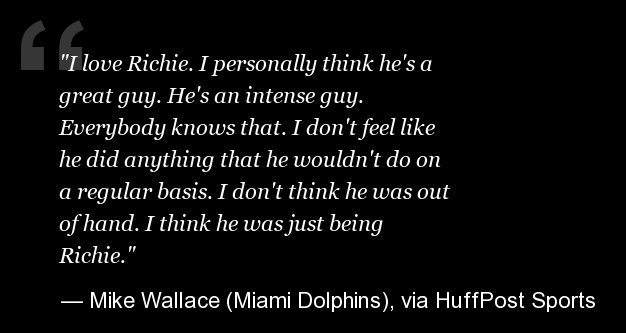