When Joel Griffin arrived at his 13-year-old daughter's Middle School Field Day in Stafford, Virginia, several of her classmates ran to him with the news: Gwyneth was passed out in a ditch.

Her heart had stopped. And nobody was trying to revive her.

None of the teachers or other bystanders knew CPR. There was no automated external defibrillator (AED) to jumpstart her heart, which had gone into sudden cardiac arrest.

Paramedics were on the way, but they arrived too late to make a difference. The damage done in the minutes Gwyneth was without oxygen claimed her life.

Fast forward 16 months, to a high school about 100 miles away.

During a Poetry Out Loud assembly, sophomore Ellie Whelan collapsed onstage. Realizing this wasn't part of the act, the school nurse and another teacher rushed to her aid.

CPR saved her life. In a way, so did Gwyneth.

One of Ellie's two lifesavers learned CPR just two weeks before to comply with a new state law -- "Gwyneth's Law."

Determined to find meaning in their daughter's death, Joel and Jennifer Griffin spearheaded a successful push for legislation that requires all teachers in Virginia to be certified in CPR and will soon require students to be trained in the lifesaving skill before they graduate high school. The law also recommends that schools have at least one AED on campus.

Unless they attend Richmond Public Schools.

For the simple reason that folks at the Richmond Ambulance Authority said, "Why wait?"

This all traces to a meeting last year, when the RAA Board reviewed a proposal from operations and training staff on ways to support the Richmond Public School system. Part of the proposal identified the incoming requirements of Gwyneth's Law and its proposed implementation. The overwhelming consensus was to begin immediately and not delay the provision of life saving instruction.

Implementation and training began when Shannon Daniel, one of RAA's training managers, teamed with Charlene Rodgers, the school system's nursing supervisor. Soon, the plan was off and running. 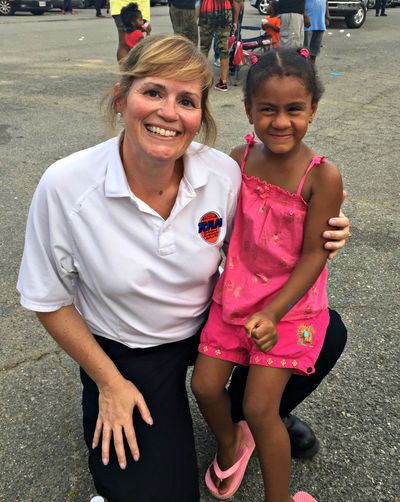 Actually, it was a pretty simple plan: Daniel and RAA offered to train the trainers. Richmond Public School employees could become certified as trainers and thus qualified to teach CPR and AED skills to students.

It was a voluntary offer for something that eventually would be mandatory. With the stories of Gwyneth and Ellie still fresh in everyone's mind, the sessions -- which ran four to six hours on a Saturday -- proved to be an easy sell.

"I coordinated and led the training of teachers, nurses, even security officers and bus drivers - anybody who wanted to become an instructor in HeartSaver CPR and First Aid," Daniel said. "They were actually quite excited to be part of it. They understood the need."

With a laugh, she added: "The only obstacle was a snow day, and there was only one. We lucked out in that respect and rescheduled."

Daniel estimates that she taught 50 people. If each of them trains 10 people, that's another 500 potential lifesavers.

To appreciate how important it is to know CPR, consider these facts:

The American Heart Association helped pioneer CPR over 50 years ago, and continues to refine this lifesaving technique. I'm proud to note that my organization trains more than 16 million people in CPR, First Aid or Advanced Life Support programs each year in more than 100 countries.

Even without formal training, anyone can be a lifesaver by remembering the steps to Hands-Only CPR -- call 9-1-1, then push hard and fast in the center of the chest, preferably to the beat of the classic disco song, "Stayin' Alive" until help arrives.

With the 2015-16 school year now underway, it's exciting to note the growth of our push to make CPR instruction part of the high school curriculum across the nation. In other words, we want every state to have their version of "Gwyneth's Law," an effort that's been going on for many years. 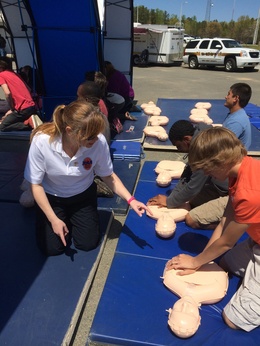 Laws or requirements are on the books in 24 states. New York is expected to soon join the list, which would push us past a significant milestone: More than half of all high school students in the United States would be in line to receive this crucial training.

To help with the head start in Richmond, the RAA has applied for grants to get the training kits needed to teach both the adults and the students. Otherwise, expenses have been rather minimal. Daniel has led the training as part of her RAA job, and school employees came on their own time.

Daniel's devotion to CPR training is evident in her voice as she describes the power of this technique and the many success stories she's been around.

Her devotion also is evident in her actions, as she created the Central Virginia CPR Council to provide CPR training at various festivals, churches and other gatherings across the state to anyone requesting it. 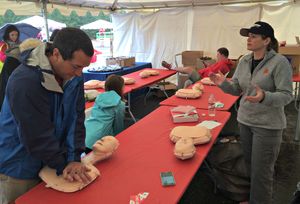 "The more people we can get trained in CPR the better," she said. "If I could spend all day every day training people in CPR, I would. I know it works. I've seen it work. I know the potential of saving a life when it's performed correctly."

Like Gwyneth's Law, Daniel's devotion is rooted in tragedy.

It started during her sophomore year in college, when her 44-year-old aunt went into cardiac arrest. The woman had a fatal heart defect, so CPR wouldn't have saved her. But nobody knew it at the time. And her son, the only person with her at the time, is haunted by how helpless he felt.

"It's resonated with him his whole life that he couldn't do CPR," Daniel said. "My cousin has told me that he wishes he'd known CPR just so he'd be at peace knowing that he'd done everything possible to save her."

About a year later, Daniel was studying in Spain -- working toward becoming a Spanish teacher -- when she saw a man drowning in a pool at her university. Like her cousin, she felt helpless. Luckily, a lifeguard arrived in time to save the man. That did it; she soon learned CPR.

The following year, she studied in Venezuela. A friend was stabbed and she provided whatever care she could. That prompted her to take a First Aid class. Her roommate at the time was a nursing student, and she encouraged Daniel to take EMT classes.

Daniel indeed followed her dream of becoming a Spanish teacher, but it lasted only about 2½ years. She switched to emergency medical services, and has been doing it for 18 years, nearly the last seven at RAA. It's worth noting that she provides CPR training in Spanish, too.

"There's obviously been an unforeseen path that I've followed," she said. "It's all served me in some capacity, all my education and training."

Daniel recently received the 2015 Regional EMS Council Award for Outstanding Prehospital Educator from the Old Dominion EMS Alliance. The entire RAA team recently received the 2015 Dick Ferneau "Paid Service of the Year" Award by EMS World Magazine and the National Association of Emergency Medical Technicians (NAEMT); the award recognizes an agency for overall operational excellence in EMS; their CPR efforts were a major component of the granting of the award.

The NAEMT honor will be presented Sept. 16-17 at the EMT World gathering in Las Vegas.

Daniel, however, won't be there for the ceremony. Like the majority of the RAA workforce, she will be preparing for their next big event. 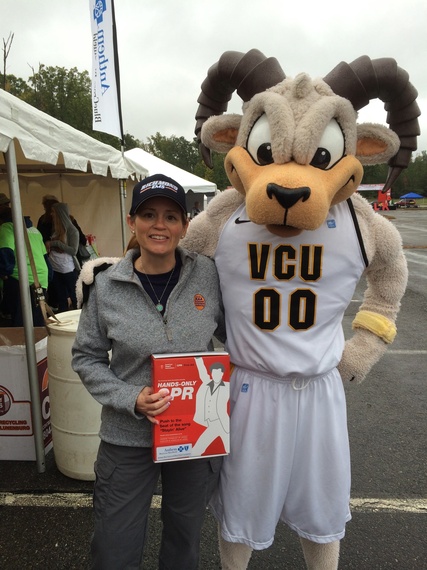