Despite rapid and substantial growth in the amount of land and sea designated as protected habitat over the last four decades, the diversity of species the world over is plummeting, a new study has found.

And yet, according to a widely cited index used to track planetary biodiversity, the wealth of terrestrial and marine species has seen steady decline over roughly the same period, suggesting that simply protecting swaths of land and sea -- a common conservation strategy worldwide -- is inadequate for preventing the steady disappearance of earth's creatures.

"The problem is bigger than one we can realistically solve with protected areas -- even if they work under the best conditions," said Camilo Mora, an assistant professor in the Department of Geography at the University of Hawaii at Manoa and lead author of the study. "The protected area approach is expensive and requires a lot of political and human capital," Dr. Mora continued in an email message to The Huffington Post. "Our suggestion is that we should redirect some of those resources to deal with ultimate solutions." 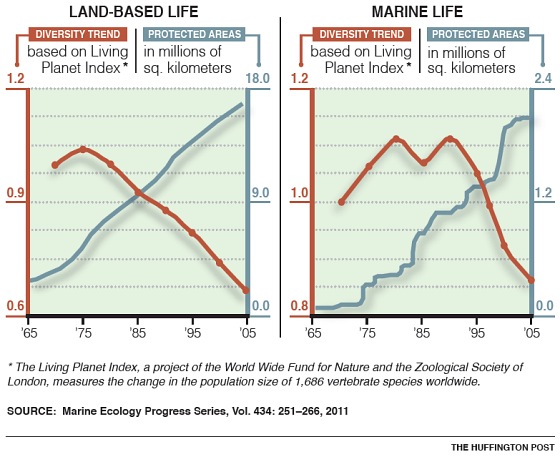 The steady loss of biodiversity -- defined roughly as the rich variety of living things -- can, in turn, have profound implications for human civilization, which relies on healthy, variegated ecosystems to provide a host of ecological services from water filtration and oxygen generation to food, medicine, clothing and fuel.

The precise value of such services is difficult to quantify, but one economic analysis estimated they were worth as much as $33 trillion globally.

While the study concedes that individual protected areas that are well-designed and well-managed can be successful in preventing the imminent extinction of species and ecosystems, a variety of other forces conspire to further reduce biodiversity overall.

"Protected areas, as usually implemented, can only protect from over-exploitation, and from habitat destruction due to exploitation and other direct human actions within their borders. They are a tool for regulating human access and extraction," said Peter F. Sale, assistant director of the United Nations University Institute for Water, Environment and Health, and the study's co-author. "Biodiversity loss is also caused by pollution, by arrival of invasive species, by decisions to convert habitat to other uses -- farms, villages, cities -- and by various components of climate change," he told HuffPost. "None of these are mitigated by the creation of protected areas except, possibly, the removal of habitat to other uses."

In other words, the researchers, who based their analysis on a broad range of global data and a review of existing literature, suggest that the implementation of habitat protection is unable to keep pace with other stressors contributing to species loss overall.

This is partly due to lack of enforcement. Only about 5.8 percent of terrestrial protected areas and 0.08 percent of marine sanctuaries see reliable and consistent enforcement.

Further, the authors note most research suggests that between 10 percent and 30 percent of the world's ecosystems need to be protected to preserve optimal biodiversity. But despite what appears to be a rapid increase in protected lands, the pace is too slow to achieve those targets anytime soon. On land, the 10 percent target, under the best of circumstances, would not be reached until 2043, the study estimated. The 30 percent target would not be achieved until 2197. The same target percentages for marine sanctuaries would be reached by 2067 and 2092, respectively.

And these projections are almost certainly too optimistic, the authors note, because the rate of establishment of new protected areas would be expected to slow considerably as conservation efforts runs up against the needs of a rapidly expanding human population.

[D]emand on marine fisheries is projected to increase by 43 percent by 2030 to supply ongoing food demands, while projected CO2 emissions by 2050 are expected to severely impact [more than] 80 percent of theworld's coral reefs and affect marine fish communities globally, causing local extinctions and facilitating invasions resulting in changes in species composition of up to 60 percent. On land, the growing human population and demand for housing, food and energy are expected to substantially increase the intensity of stressors associated with the conversion of land cover to agriculture and urbanization, e.g. the release of nutrients and other pollutants, climate warming and altered precipitation. In short, the extent of coverage by [protected areas] is still limited and is growing at a slower rate than that at which biodiversity threats are developing.

Global population is expected to pass 7 billion in October, according to new estimates from the population division of the Department of Economic and Social Affairs at the United Nations. That's an increase of 1 billion people in about a dozen years.

Other challenges include the size of protected areas -- which are often too small for larger species to survive -- and the lack of connectivity between protected areas, which is needed for healthy genetic dispersal.

The authors of Thursday's analysis suggest that reversing biodiversity losses will require a vast rethinking of conservation strategy -- one that redirects limited resources toward more holistic solutions. This would include efforts to reduce human population growth -- and its attending consumption patterns -- as well as the deployment of technologies that would increase the productivity of agriculture and aquaculture to meet human needs.

Also needed, the authors wrote: a continued "restructuring of world views to bring them in line with a world of finite resources."

Dr. Sale said, "In the final analysis, we have to recognize that we are pushing up against limits set by the way the biosphere functions. Biodiversity loss is one sign of this."