Comic book author Rick Geary is a longtime fixture at Comic-Con International. Back in 1980, he took home their Inkpot Award given to individuals for their contributions to the world of comics. And this year, as it has in the past, his artwork (The Toucan) adorns the cover of the official events guide and "Reader" t-shirt.

Geary is at the 2015 Comic-Con International, which starts this week in San Diego. He is taking part in a panel, signing books, and celebrating the release of a new hardbound work, Louise Brooks: Detective (NBM Publishing). See some sample pages here.

This new comic is something of departure for Geary. Of the last number of years, he has been engaged in an ongoing non-fiction series, A Treasury of XXth Century Murder -- a follow up to his popular and well regarded A Treasury of Victorian Murder which launched 20 years ago with Jack the Ripper. Both series are true-to-life comic book accounts of sensational death.

Geary's new comic is a departure because its fiction, though it is based on the life of a real person, the iconic Kansas-born silent film star Louise Brooks. 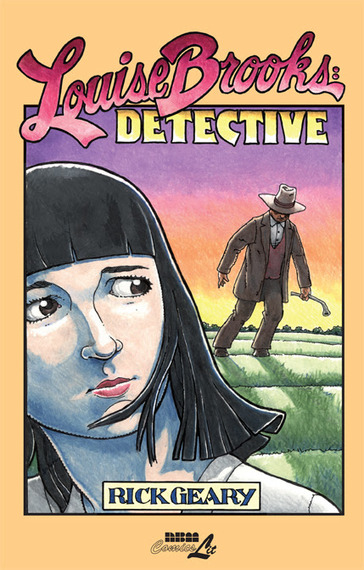 The story centers on the actress' return to Wichita after quitting Hollywood. It was one of the low points of her life, though she was still just in her early thirties. Living at home, she becomes intrigued by a murder involving a new friend, her friend's shady beau, and a famous reclusive writer. Not before she gets herself into trouble will Brooks emerge with the solution the local police have failed to grasp. It's a taut page turner, and an intriguing story that might make for a clever screenplay.

Geary is an Eisner award-winning cartoonist and illustrator with a distinctive visual style. He is the author and illustrator of several books, and has worked for Marvel Entertainment Group, DC Comics, Dark Horse Comics, and the revived Classics Illustrated series. For thirteen years, Geary was a contributor to National Lampoon. His work has also appeared in Heavy Metal magazine, MAD, Spy, Rolling Stone, and the New York Times Book Review. In 1994, the National Cartoonist Society awarded Geary its Magazine and Book Illustration Award.

Thomas Gladysz: Your ongoing multi-volume true crime series, "A Treasury of Murder", is a great achievement in comic art. You done a number that center on historic mysteries, and few of which focus on old Hollywood. How did you come to write one about Louise Brooks?

Rick Geary: After about 25 years of producing true murder books, my publisher Terry Nantier of NBM Publishing, suggested I do a work of fiction. I had long had an idea in my head for a murder mystery set in Kansas in the 1930s, so from there I made the leap of casting Louise Brooks as the detective. It seemed just outrageous enough to work.

TG: In Louise Brooks: Detective, you take a little documented time in the actress' life -- after she quits Hollywood and returned home -- and imagine her getting involved in a murder. Was there room then in Brooks' real life story to "make something up"?

RG: By fortuitous coincidence, my idea of setting the story in Kansas fit in with Louise's return there in 1940, after her Hollywood career had dissolved away. She was definitely at loose ends and, it would seem, ripe for any new kind of adventure. 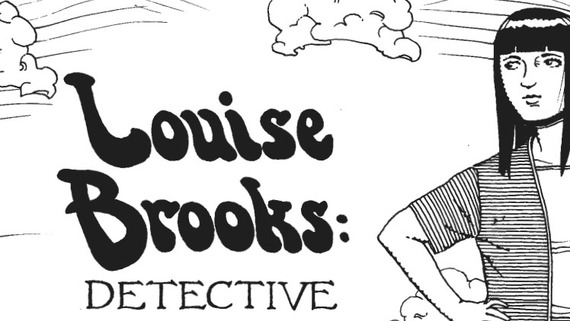 TG: I've heard that you're related to Louise Brooks? Is it true?

RG: Yes, Louise was my mother's second cousin, and they both hailed from the same area of southeastern Kansas. My mom's maiden name was Brooks and it's also my middle name.

TG: We've also heard that you are friends with Barry Paris, who wrote the biography of actress published in 1989.

RG: Yes, Barry and I go back a long way. We're both from Wichita, and we've worked on various projects together since our high school days.

TG: When and how did you first become aware of Brooks as an actress and silent film star?

RG: I had been dimly aware of her as an image and icon, but knew very little about her until the early 1980s. That's when I first found out that we were related. I read her memoir Lulu in Hollywood and began to seek out her movies and find as much information on her as I could.

TG: There is an impressive amount of detail, both in the text and in the images, which suggests you did your research. What you do to prepare?

RG: I envisioned the book as a kind of tribute to Wichita and the little town of Burden, where both my mother's and Louise's branches of the Brooks family converged. This involved many trips there and many photos taken. Luckily the buildings and other locations in both towns are still there.

TG: For example, you mention the philosopher Schopenhauer - a favorite of Brooks, her affair with Charlie Chaplin, that she scrubbed floors at home as a kind of repentance after quitting Hollywood, and, as well, the name of the building in which she opened a dance studio in Wichita. Your attention to detail is remarkable. 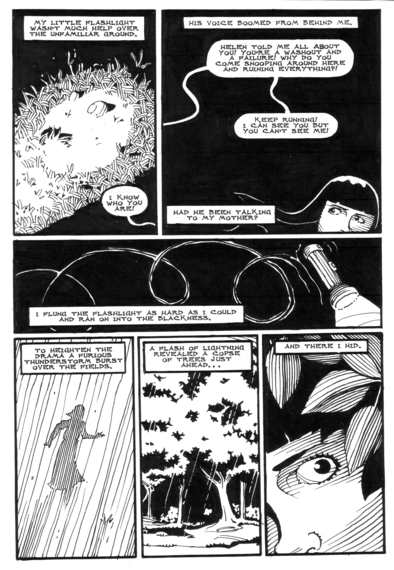 RG: I put to use many of the biographical details I had learned over the years, from Barry's biography and other sources, to fill in the details of this period in her life. I've always loved it that she was such a voracious reader.

TG: There is the matter of Brooks' hair. She is famous for her bobbed hair -- yet you chose to draw it a bit longer. Why so?

RG: I based her look on photos I had seen of her during this period in her life. The bangs were still there, but her hair had grown to shoulder-length.

TG: The crime at the center of the story seems quite real -- like it could have happened. It's complex, and believable. Was it based on an actual event?

RG: No, the crime is pretty much all made up.

TG: What about the writer Thurgood Ellis, a key character in the story. Was he real?

RG: Thurgood Ellis wasn't real, but I based him on the kind of writer, a la J.D. Salinger, who develops a dedicated following with groundbreaking work and then vanishes from the cultural landscape.

TG: There have been a handful of comic strips and graphic novels based on Brooks, going back all the way to the late 1920's. I am thinking of Dixie Dugan, which ran for decades in American newspapers, as well as Valentina -- the long-running Italian erotic comix by Guido Crepax that appeared in Heavy Metal magazine. There are other European works based on Brooks by Floc'h, Hugo Pratt, Marion Mousse and others. Kim Deitch has also drawn her. Brooks even appears in Dr. Who comic, and inspired a character in the Sandman series. Why do you think so many artists have drawn Brooks?

RG: I remember the Dixie Dugan strip, which ran in the Wichita paper for years. There's something about the eternal image of Louise Brooks that captures the imagination of artists worldwide.

TG: Were you aware of these earlier efforts? How does your work fit into theirs?

RG: I've been vaguely aware of those European versions of Louise, but I was never a regular follower. I'm not sure if my work fits in with theirs at all.

TG: Louise Brooks makes a great detective. And the final page suggests she might even write a mystery novel. Any chance she will return in your work?

RG: My hope is that she will return in a second volume someday.

More about Rick Geary and his work can be found on his website at www.rickgeary.com. As he has for many years, the artist and his wife will be manning their table at Comic-Con International, which is set to run Wednesday July 8th through Sunday, July 12th in San Diego, California.

Thomas Gladysz is an arts and entertainment writer and early film enthusiast. He is also the director of the Louise Brooks Society, an online archive and international fan club which he began online 20 years ago. Gladysz has organized exhibits about the actress, contributed to books, appeared on television, and introduced the actress's films around the world.