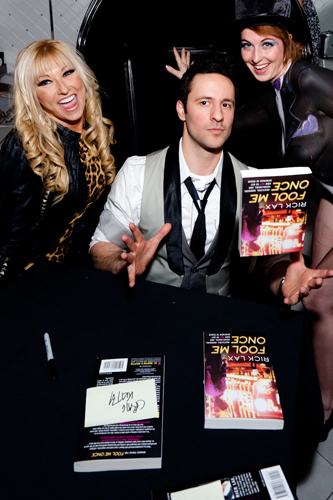 "At I first thought I'd be here a few weeks, maybe a few months at most. Three years later I'm still here. The longer you stay here the harder it will be to enter back into the real world."

That's Rick Lax talking about Las Vegas, a topic he loves that, quite happily for him, he's been able to study with the same focus, the same concentration, he has applied to his studies of magic and law.

At 28, the Michigan native has written two books. His first, Lawyer Boy: A Case Study On Growing Up, tells of his adventures in the land of law school, where, having given into what is apparently a genetic imperative that he go into the family business of law, he gave up his dream of becoming a magician and enrolled in DePaul University College of Law in Chicago. The inevitability of that career is underscored in the book by a family tree graphic festooned with attorneys. His father was a tax lawyer, but not Rick.

"If I was going to be a lawyer," he recalls, " I wanted to get into the courtroom. Only five percent of lawyers actually try cases in court so I was limited to criminal, family or personal injury law. I chose personal injury."

His tale of that first year in law school was published to terrific reviews that, oddly for any other book but fitting for Lax's work, were often from magicians. Penn Jillette, half of the Las Vegas staple of Penn & Teller wrote, "Rick Lax is really funny and uses his background in magic to see through the bullshit and hypocrisy that make up the law school experience. I'm really glad he's getting the law degree so he has a job other than magic -- we don't need this kind of competition."

Of course, when Jillette said that, the writer was in the Midwest. Now, Rick Lax --magic dreams and all -- is in Las Vegas and his latest book, Fool Me Once: Hustlers, Hookers, Headliners, And How NOT To Get Screwed In Vegas, is a study of this city, a city that can -- were the powers-that-be absolutely honest -- list duplicity, hoodwinking and/or scamming in its list of civic attributes.

Now, it is clear that Lax does not believe these are necessarily "bad" qualities. He clearly believes that they are interesting character facets found more in Las Vegas than in many other places and that they should be examined.

Fool Me Once, is what Rick Lax acknowledges to be a "stunt" memoir. After publishing Lawyer Boy, St. Martin's Press liked his work and the reception the book got so, he explains, the Las Vegas book was born. And, while it is a memoir, there are other elements.

"There's this fiction within every stunt memoir," Lax says. "Your publisher pays you to go out and have an adventure and write about it. If you do this, hilarity will ensue, knowledge will follow and a book will come out. And, you're getting paid $20,000 to go to Las Vegas. What's better than that?"

In a book so well annotated and footnoted that it would make a fact-checker deliriously happy, Lax is scrupulous about his sources and is not hesitant about ensuring his story gets told as he'd like it. He's also not given to sparing himself.

For example, the book begins with the tale of his last girlfriend in Chicago who either was or was not involved with criminals. He never was able to find out the truth but, looking back, says, "That story with my ex-girlfriend being conned really happened and it scared the crap out of me. It sounds to me now like this was not her first experience with criminals. It sounds like she's drawn to them. But I wanted to be sure that never happened to me again. I wanted to learn more about deception and about how to protect myself."

Hence, the journey to Sin City. 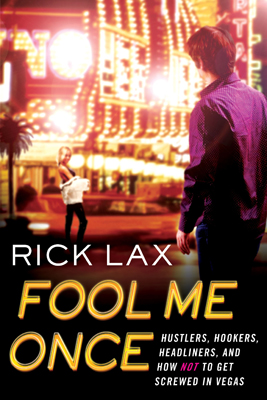 Once here, Lax sought out the community of magicians, sharply aware of the irony of the fact that as a magician he's "learned how to deceive people in the context of magic and I like writing stories that have a deceptive angle, that have hypocrisy."

Of the magic shows regularly in Las Vegas, he says, "Penn and Teller have the most deceptive magic show in the history of magic. They perform the tricks hardest to figure out. David Copperfield's is the most emotive show. It moves you and fools you."

In Fool Me Once Lax spends a great deal of time on the city's clubs and nightlife. He recalls, "I was very unpopular in high school. I didn't get invited to parties and wasn't invited to the cool clubs. I couldn't figure out how it worked. Here in Las Vegas, I was the guy who couldn't talk my way in and I didn't like waiting in line or paying a cover charge."

But, being friendly with the right people helped and he has spent a great deal of time in clubs. "I spend a lot of time on the Strip. I see a lot of pretty, young rich people spending a lot of money. You begin to think this is what the world is. Because, except for someone working in the clubs, those are the people you see there. And, everyone is on their best behavior. You start to think that's -- good looking rich people spending a lot of money -- is the norm.

"There's a lot of great stuff in the nightlife here. Obviously, it's better if you're a high roller because you get to experience all the best things."

Why do people go to clubs? Lax responds quickly: "People go to get laid. That's what it's all about, for guys, especially. You're not going to spend $500, $1,000 or $1,500 on alcohol just to drink. You do it because you think you can be with someone. If you want to see the most beautiful women in the world, that's the nightlife.

He notes that, "The life span of a guy in the club scene is very long. Girls, however, seem to stay between a month and 10 years."

Of course, Lax doesn't just hang at clubs and comment on those experiences. He's a staff writer for the alternative Las Vegas Weekly where he profiles people, reviews books -- generally seeming to write about what interests him (the ideal job, just ask any writer).

In between all his documentation of the social mores of Las Vegas, Lax reads books he classifies as "popular non-fiction" This includes comedian Patton Oswalt ("the voice of Ratatouille, and Sherry Turkle, the MIT professor who studies the relationship between people and technology, particularly robots and robotic pets.

Lax is also a poker player and advises, "If you want to gamble in Las Vegas and win, there are two ways to do it. One, learn how to play poker well and, two, learn how to count cards."

As noted above, his short stay in Las Vegas has turned the tourist bait into his home. And he likes it that way. "I went back to Michigan to visit and everything was so slow," he says. " I like the pace here but I can't imagine staying here forever."

Luckily for Rick Lax, "forever" is a long time away. Until then, he plans to say, play, work and enjoy it in Las Vegas.

The photos above, of Lax at a book-signing and of his book cover, are courtesy of Rick Lax. Photo credit top: Bryan Adams