WASHINGTON -- Politically engaged Republican activists have decisively soured on Rick Perry and warmed to Mitt Romney over the last few weeks, according to the latest HuffPost-Patch Power Outsiders survey in the early primary and caucus states. Romney has also gained a clear advantage over Perry on the critical question of electability.

We asked 160 Republican political activists, party officials and officeholders in Iowa, New Hampshire and South Carolina how their opinions of presidential candidates Romney and Perry have changed over the last two to three weeks. 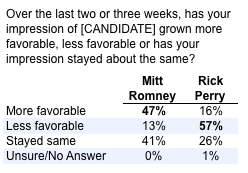 In our survey four weeks ago, Perry had registered a strong impression. A majority (58 percent) used positive terms to describe the Texas governor, and better than three out of four rated him presidential (77 percent) and capable of beating Barack Obama (76 percent).

The next week, our survey found slightly better marks for Romney. He had modest advantages in having the makings of a good president and being electable, although Perry and Romney were nearly even in the percentage of Power Outsiders who felt strongly about their respective ability to beat Obama in 2012.

The questions on the most recent survey are not strictly comparable because they ask for direct comparisons of Romney and Perry, but the results are vastly different. When pressed to choose, the Power Outsiders give Romney a huge advantage over Perry on both electability and presidential stature. He leads by much better than 2-to-1 (63 to 24 percent) on ability to defeat Obama in the general election and by a slightly smaller margin (56 to 30 percent) as the candidate who would make the best president. 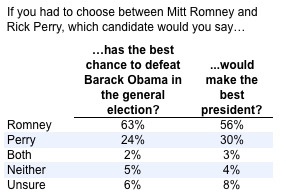 The Power Outsiders polls do not survey a cross-section of all Republican voters, but rather attempt to monitor the "invisible primary" now very much under way among influential Republican activists and political insiders nationwide (they are "outsiders" from the perspective of Washington, D.C., but are insiders within their local communities). This week, we heard from 44 Power Outsiders in Iowa, 50 in New Hampshire and 65 in South Carolina.

In their book, "The Party Decides," political scientists Marty Cohen, David Karol, Hans Noel and John Zaller argue that "party leaders, aligned groups, and activists" have been a "systematic force in presidential nominations." In particular, they find these influential party actors are "a major reason that all nominees since the 1970s have been credible and at least reasonably electable representatives of their partisan traditions."

That's why Romney's emerging advantage as an electable general election candidate poses a mortal threat to the Perry campaign. If it persists, Perry will have trouble raising money, gaining further endorsements and, ultimately, winning over rank-and-file Republicans who participate in caucuses and vote in primaries.

Our surveys are not a scientific random sample of any larger population but rather an effort to listen to a swath of influential, local Republican activists, party leaders and elected officials in Iowa, New Hampshire and South Carolina. All of the individuals listed below have agreed to participate in the Power Outsiders surveys, although not all responded to this week's questions. This week's interviews were conducted between Sept. 23 and Sept. 27, 2011. [Interview dates corrected].