Gov. Rick Perry's strong first impression on Republicans extends to some of the most politically engaged GOP activists in Iowa, New Hampshire and South Carolina, according to a survey conducted this week by The Huffington Post and Patch in the early primary and caucus states.

With Perry set to debate the rest of the Republican field Wednesday night at the Ronald Reagan Presidential Library in Simi Valley, Calif., these Republican activists will be watching to see if he lives up to his strong early promise as a leader who seems both ready to be president and able to beat Barack Obama in 2012.

This week, our HuffPost-Patch Power Outsiders poll of 159 political activists, party officials and officeholders in the early primary and caucus states focused on the Texas governor. The survey does not look at a wide swath of Republicans, but rather attempts to listen to the "invisible primary" among influential local activists and political insiders that has historically driven nomination campaigns. We heard from 36 of them in Iowa, 52 in New Hampshire and 71 in South Carolina this week.

We first asked these politically engaged Republicans to use just one word to describe their impression of Rick Perry. More than half of their answers (58 percent) were positive. The most frequent positive words, as presented in the word cloud below, were "leader," "impressive," "decisive," "charismatic," "confident, "electable" and "winner." 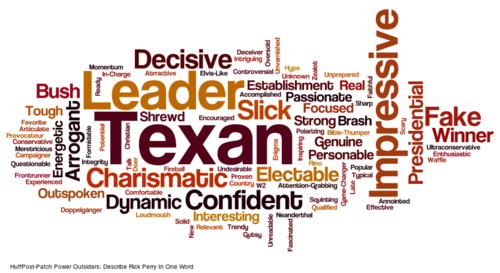 Less than a quarter of the responses (24 percent) were negative, including "slick," "fake" and "arrogant."

Some of the answers were either neutral or descriptive in a way that is not clearly positive or negative. The most frequently mentioned terms, "Texas" and "Texan" (7 percent), fall into that category, as do "Bush," "George Bush" and "establishment" (since these responses come from GOP activists and officeholders who are very much a part of their local establishment).

Probing deeper, we found these influential local Republicans to be impressed with Perry in three specific areas. Roughly three out of four describe Perry as someone who takes stands they agree with (75 percent), is ready to be president (77 percent) and can beat Obama in the general election (76 percent). Only a small handful (14 percent on each of the three questions) say these phrases do not describe Perry well. 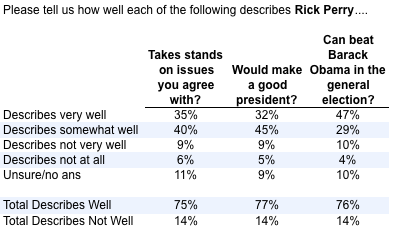 Moreover, more than one-third say the phrases "would make a good president" and "takes stands on issues you agree with" describe Perry "very well." And nearly half (47 percent) feel strongly that Perry will be able to beat Obama.

This perception of electability among influential Republicans in the early primary and caucus states mirrors findings from the latest Washington Post/ABC News poll, which found Republican voters nationwide giving Perry the highest marks on electability. On the question of which candidate has the "best chance to beat Obama," 30 percent in that poll chose Perry, 20 percent opted for Mitt Romney and the other Republicans ran far behind. But Perry scored just 21 percent on which candidate is "closest to you on issues."

Of course, the flip side is that roughly half of the Republicans in the HuffPost-Patch poll are either unsure or only "somewhat" impressed with Perry on the issues and as a potential president. They're waiting to hear more. As one of our South Carolina respondents put it, "the jury is still out" and Perry still "needs to answer the tough questions and provide details on what his plan is to change the direction of the economy." Many tests remain. HuffPost's Jon Ward picked up similar uncertainty about Perry in conversations with both high-profile and ordinary Republicans over the past week.

Perry has moved into the lead as the choice of Republicans nationwide on about a dozen surveys conducted over the last month. Our nonscientific survey shows that his very strong first impression also extends to influential local officeholders, party officials and activists in the early primary states.

Those initial good reviews put Perry in an enviable position going into his first GOP candidate debate. His introduction has raised Republican hopes dramatically. The Wednesday debate and future faceoffs will help determine whether he becomes the consensus choice as the caucuses and primaries begin next year.

All of the individuals listed below have agreed to participate in the Power Outsiders surveys, although not all responded to this week's questions.