WASHINGTON -- A new poll out Tuesday from CNN and ORC International shows Texas Gov. Rick Perry leading the field of candidates vying for the 2012 Republican nomination, confirming the trend shown on four more surveys in recent weeks. But a look past the horse race numbers shows that the real battle is yet to come.

Recent polls show Perry's surge coming mostly from the Tea Party, which was found by Pew Research Center surveys to be the Republican faction most engaged in the election. While that group will be critical, the underlying data shows Republican voters are still considering their choices. The crucial question is whether Perry or any other candidate can gain majority support and unite the Republican party.

The latest poll from CNN largely confirms results reported last week by Gallup. Both show that Rick Perry has emerged as the current favorite of Republicans, but indicate much higher support for Perry among Tea Party Republicans. 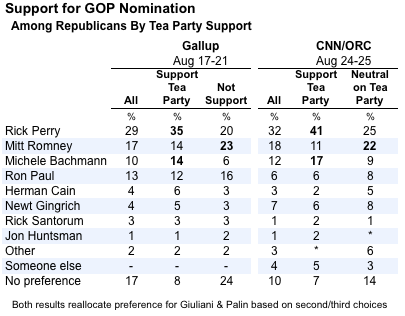 A new Pew Research Center survey, also conducted in late August, presents a more nuanced view of the current state of Republican decision making, because the survey separated questions about respondents' familiarity with and willingness to support each candidate. On name recognition, Tea Party supporters were generally more likely to have heard of the lesser know candidates. 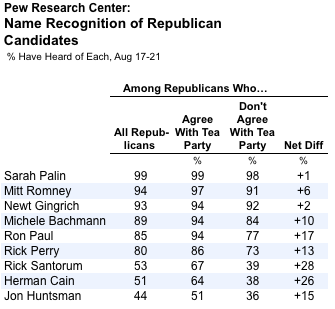 The Pew Research poll then asked about respondents' willingness to support each candidate. Again, Perry scores best among Tea Party Republicans in terms of hard-core support. Forty-two percent of Republicans who agree with the Tea Party say there is a "good chance" they will support Perry, although both Michelle Bachmann (37 percent) and even Sarah Palin (31 percent) are not far behind. The total number of "good chance" responses adds up to 235 percent, so many Tea Party Republicans are clearly still considering which candidate they may ultimately support. 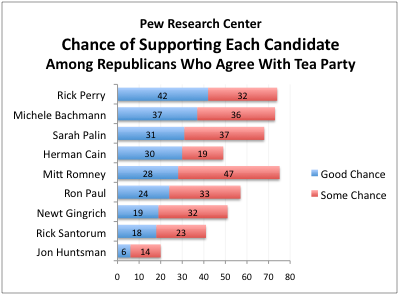 While Mitt Romney gets a lower "good chance" of support score (28 percent) among Tea Party Republicans, he does much better (75 percent) in terms of the total who say there is either a "good chance" or "some chance " they will support him. That combined score is slightly better than that received by both Perry (74 percent) and Bachmann (73 percent). So although Romney may not be the first choice among Tea Party Republicans, most are still open to supporting him.

The numbers are very different among Republicans who do not agree with the Tea Party. Potential support for all of the candidates is lower, partly because these voters are less familiar with most of the candidates. Romney ranks first on two measures -- those who say there is a "good chance" they will support him (24 percent) and those who say there is at least "some chance" they will support him (65 percent). Perry trails on both measures among non-Tea Party supporters, but much of the difference has to do with his lower name recognition. 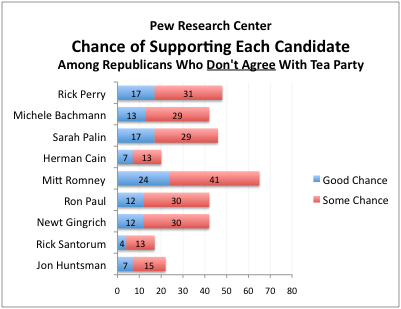 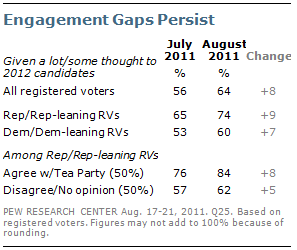 So Rick Perry has emerged as the leader with the portion of the Republican party most likely to vote or participate in party caucuses.

But as the Pew Research findings demonstrate, the initial preferences expressed by Republicans on polls are not yet final decisions. Yes, Rick Perry has surged, especially among Tea Party Republicans, and is well positioned to dominate that wing of the party. However, other candidates -- especially Sarah Palin -- may still enter the race, Perry has not yet participated in a campaign debate and the initial “invisible primary” for endorsements and campaign cash is still very much underway.

The bigger issue is that the ultimate nominee will need to unite enough of the Republican party to win a majority of convention delegates, and no candidate has yet received anything close to that level of support on traditional poll measures. Rick Perry has an advantage for the moment, but we still have a long way to go.