Most of the post-debate media chatter centered on the sparks that flew between top-tier candidates Mitt Romney and Rick Perry. That's to be expected, of course -- that's precisely the way the media framed the debate going in to last night. And for the most part, that's the story today, with the addition of some "Jon Huntsman tried to inject himself into the race" sidelines. Writing for The Plum Line, Jonathan Bernstein says that "the most notable thing about the Republican field" is the "absence of a middle tier -- candidates who would make perfectly plausible nominees, but just weren’t likely to win." Well, I'd disagree with that -- the "middle tier," for the moment, is Ron Paul.

And if this image is any indication, Rick Perry, at the very least, hasn't managed to put Paul in his rear view: 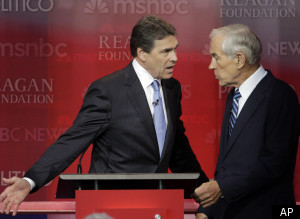 This picture of Perry getting in Paul's face was apparently snapped while the cameras were not rolling at the debate last night. The two men have some beef -- Paul's most recent ad, if you recall, called out Perry for being a "cheerleader" for Al Gore's presidential candidacy, and presented Paul as the true heir of the Reagan legacy. The Perry campaign had shot back at it prior to last night's debate (making Rick Perry, to the best of my recollection, the first presidential candidate to ever respond to a Ron Paul attack ad), and the battle was restaged for the cameras last night. For those who weren't watching, Perry brought up Paul's decision to quit the GOP over the policies of the Reagan administration, and Paul countered by saying that he's stayed true to the "message" of Reagan, if not the man himself.

This image of the same confrontation (which due to the vagaries of licensing I can link to but not reproduce here) is even more jarring -- and not just because it recalls the famous personal space invasion that failed New York Senate candidate Rick Lazio mounted against Hillary Clinton during one of their public debates. Here, Perry is not just in Paul's face, he's made physical contact. Perry is supposed to be all about the Texas swagger, but let's recall that Paul is a septuagenarian. And whatever one thinks of his positions, Paul's public demeanor is generally regarded as respectful and gentlemanly.

At any rate, the upside for the Paul campaign -- who no doubt see Perry as an establishment politician, offering warmed-over versions of the anti-federal government tropes that Paul's been enunciating for years -- is that they can see this as a sign that they've managed to rattle Perry's cage. Don't doubt for a minute that these pictures won't steel the resolve of Paul's core supporters, either. I wouldn't be surprised if the return fire sounds like a "money bomb."