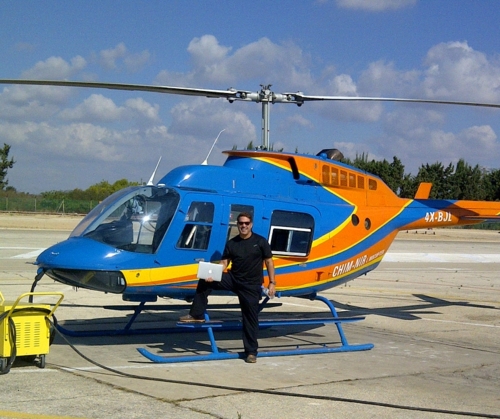 It's my second day in Israel.

I'm on a helicopter that takes me directly over the home and farm of former Prime Minister Ariel Sharon, who has been in a coma for nearly six years. The grounds are beautifully manicured, but as I fly over them, all I can think of is the image of the war hero turned statesman surrounded by nothing but tubes and nurses.

Our landing zone isn't far from there. I am in Qassam territory -- the place where Israeli security officials tell me a rocket, filled with who knows what, strikes once every 24 hours.

Every home, school and bus stop in Sderot is equipped with a bomb shelter. I notice how terribly ugly, but seemingly necessary, these are. They are geographically and specifically placed to give each Israeli citizen exactly 15 seconds to scurry in after hearing an air raid siren.

Sderot is the closest town to Gaza. Although the rockets can reach as far as Ben Gurion International Airport, it is here in Sderot where the pain is really felt. Ninety-two percent of residents have experienced a rocket fall near them. Home sales are down fifty percent since the rocket attacks began. Eleven factories have shut down. Sixty-five percent of the Sderot residents know someone injured by a rocket attack. And eighty percent of the population exhibits signs of anxiety. Wouldn't you?

Micky Rosenfeld is Israel's anti-terrorism superstar. He looks like a uniformed Hollywood pin-up. Blond, blue eyed and chiseled, he shows me what's left of the hundreds of rockets he's collected. Then he confides in me what he says keeps him up at night: the rockets are no longer being made in Gaza. He shows me the difference between a homemade rocket made in Gaza and the more sophisticated variety made in Iran.

I comment that the rockets are still so unsophisticated, compared to the IDF's weapons. But he tells me he is convinced that they are starting to experiment "with using some kind of chemical" in the warheads. He says he has intel supporting this.

At the actual Gaza border, Micky and I make small talk. He generously acknowledges my work while at CNN in covering the Middle East conflict. We are standing on a hill from where you could throw a rock into the Gaza Strip.

Like warm butter, the sense of anxiety here is so thick and you could slice it with a knife that neither side would be afraid to use. It hangs over you at nearly every moment. Watch this exclusive video of a Qassam rocket hitting an Israeli home and just imagine living with this possibility every day:

With all this tension, with an occupation on one side of the border and rockets landing on the other, you'd think hate would be palpable and overwhelming. But generally (and surprisingly), Jews and Palestinians do not hate one another. In fact, most genuinely long for peace.

More on that in my next post as I travel to Jerusalem, the holiest city in the world, and then onto Bethlehem.