The suit alleges that S&P knowingly slapped higher-than-deserved ratings on mortgage bonds so that they could get more business from banks. Many of the subprime mortgages behind these mortgage bonds went sour when the housing bubble burst around 2008.

"The water-cooler talk obviously is: Is there a political issue here?" Santelli said on CNBC Tuesday. "A lot of this talk started to hit some real saturation right around the summer of 2011 when S&P, the only rating agency, downgraded the U.S. We lost our AAA credit rating."

"There's a cynical side to everything when you deal with the government," he added.

S&P stripped the U.S. government of its AAA rating in August of 2011 during Congress' standoff over the debt ceiling, but the government still is borrowing at historically low interest rates -- indicating that the downgrade didn't scare investors off.

Floyd Abrams, the lead lawyer for S&P, floated a similar theory on CNBC on Tuesday, saying: "Is it true that after the downgrade, the intensity of this investigation significantly increased? Yeah."

Some say that rating agencies -- including S&P, Moody's and Fitch -- contributed to the financial crisis by slapping top ratings on subprime mortgages. Critics say that as a result, investors piled too much money in these mortgage bonds.

For his part, Santelli didn't dismiss the criticisms of the rating agencies. 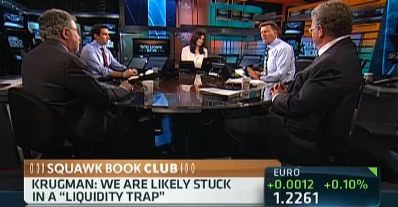 1 / 6
Joe Kernen Calls Paul Krugman A 'Unicorn'
<a href="https://www.huffpost.com/entry/paul-krugman-cnbc_n_1664771">CNBC host Joe Kernen</a> told Nobel Prize-winning economist Paul Krugman on Squawk Box in July that he resembles a "unicorn." <a href="http://krugman.blogs.nytimes.com/2012/07/11/zombies-on-cnbc/">Krugman bashed the show</a> on his New York Times blog after his appearance, prompting <a href="https://www.huffpost.com/entry/cnbc-host-joe-kernen-paul-krugman_n_1668052">Kernen to demand an apology</a>. He never got one.
CNBC