Making the rounds of the Sunday news shows, Rick Santorum reaffirmed his criticism of President Barack Obama as "a snob" for supporting a platform of universal higher education.

The former Pennsylvania senator argued that Obama's encouragement of students to go to college ignored both the reality and ambitions of those who wanted to pursue more technical careers. In an interview with NBC's "Meet the Press," he sounded a more conspiratorial note. Two days after calling colleges "indoctrination mills," Santorum suggested that the president's encouragement of college degrees was a back-door effort at philosophical base building.

The appearances by the on-again off-again GOP frontrunner laid to rest any question as to whether he would back down from his criticism of Obama's education policy (he clearly isn't). But they also did very little to clarify the source of Santorum's objection.

It's unclear whether Obama ever said that every child in American "should" go to college. Nor is it evident that he has said he "wants everybody in America to go to college," as Santorum claims he has. The president did say in a recent speech that "every child deserves a great school." He also has said that "higher education can't be a luxury -- it is an economic imperative that every family in America should be able to afford." In August 2010, the president pledged to "make sure we've got a world-class education system for everybody."

The Huffington Post asked the Santorum campaign for the comment that the former senator found objectionable, but did not get an immediate response. But if the aforementioned comments by the president constitute snobbery, than Santorum seems to be guilty as well. In the education section of his 2006 campaign website, Santorum lists the following under "Commitment to Higher Education."

In addition to Rick's support of ensuring that primary and secondary schools in Pennsylvania are equipped for success, he is equally committed to ensuring the every Pennsylvanian has access to higher education. 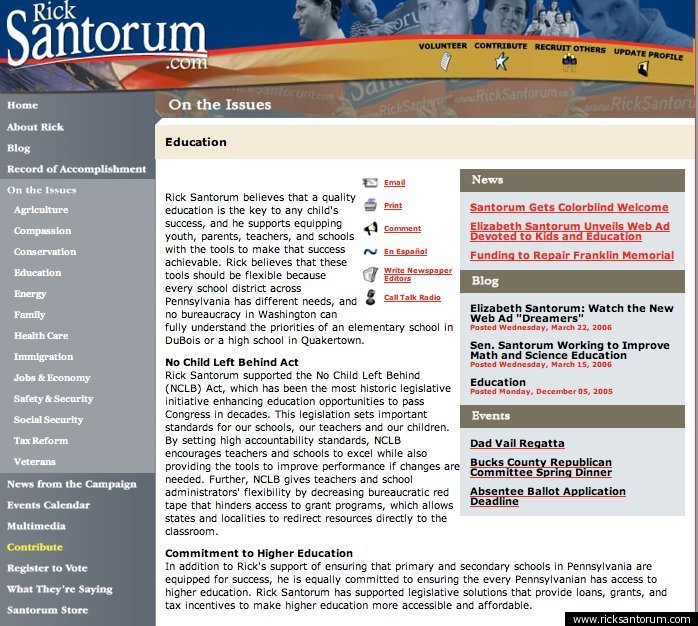 Santorum wasn't asked about his old website on any of the shows. But he was pressed on the point that, in a modern economy, students should be encouraged to pursue higher learning. He said he didn't disagree with the concept. However, he drew a distinction between his approach and the president's.