If you can take on The New York Times, you're ready to be president.

That's essentially the pitch of Rick Santorum's latest fundraising email, which tries to raise money off his recent spat with a reporter from the Times.

On Sunday, Santorum lashed out at reporters as he defended saying Mitt Romney was "the worst Republican in the country to put up against Barack Obama." He said he was talking only about Romney's ability to campaign against the president on the issue of health care.

"Quit distorting my words. It's bullsh*t," he said to a Times reporter.

Earlier today, while campaigning in Wisconsin, I criticized Romney and Obama for their outrageous healthcare legislation. Predictably, I was aggressively attacked by a New York Times reporter all too ready to defend the two of them, and all too ready to distort my words. Let me assure you, I didn't back down, and I didn't let him bully me. I think it is high time that conservatives find the courage to expose the liberal press for what they are, a defender and enabler of Romney's and Obama's liberal agendas.

Santorum asks supporters for $30, which he says is approximately what a subscription to the Times costs. 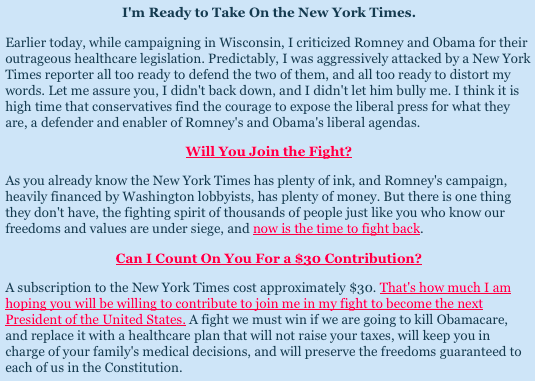