New York Observer political reporter Hunter Walker unearths a pretty hilarious relic from the past holiday season -- a wonderful little holiday card intended as a celebration of Hanukkah, sent out by Rick Santorum's South Carolina campaign team. Stars of David, candlelight, and a pair of dreidels festoon the card, but that's not the thing that makes it notable. What makes it notable is the inscription, which reads: "I am the light of the world; he who follows me will not walk in the darkness, but will have the light of life."

That, of course, is from John 8:12 of the Bible's New Testament. Or, at least, it's part of John 8:12. The part that's omitted? "Again therefore Jesus spake unto them, saying...[yadda yadda]." Celebrating the Jewish holiday with an implicit attempt at conversion? That's so Santorum. 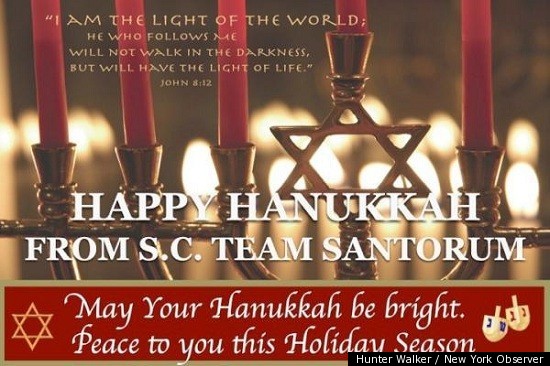