This week, former Republican presidential candidate Rick Santorum announced he'd make a decision next year about running for the White House again in 2016. Last week, while guest hosting a right-wing talk radio show in Iowa, the ultra-conservative former Pennsylvania Senator gave the country a glimpse of what a Santorum presidency might look like.

Over the air, Santorum lamented the "breakup of any kind of cooperation in Washington D.C.," and said "this president is very much to blame for this," because Obama hasn't been enough of a gentleman. Unlike the late Republican Senator from North Carolina and hate-mongering demagogue Jesse Helms. 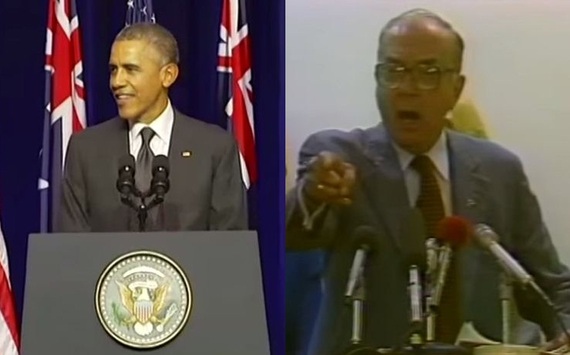 "There was no one nicer than Jesse Helms," said Santorum. "I mean, I don't think a single Democrat would tell you that on a personal level, there was anybody that was more gentlemanly, more kind than Jesse. He stood up for what he believed in, but he was always a gentleman about it."

This echoed the controversial comments made by Sen. Ted Cruz (R-TX) last year, when he told a crowd at the Heritage Foundation that Helms was the first political candidate he had ever donated to, and "we need a hundred more like Jesse Helms in the U.S. Senate." He'll have at least one new Helms clone by his side next year, Iowa Republican Joni Ernst, who managed to hide her extreme right-wing views from enough voters to win a Senate seat. Santorum campaigned for Ernst in early November, telling volunteers her victory would "set a tone for 2016."

Santorum and Cruz are Helms' ideological descendants, so it's not surprising they would speak highly of the man. But as sane observers are well aware, the real Jesse Helms spent more than five decades stirring the pot of bigotry and hatred to win elections and further his political career.

(1) Creating scurrilous, race-baiting ads and handbills in 1950 for a white segregationist candidate.

(2) Denouncing the civil rights movement in TV and radio commentaries broadcast in North Carolina throughout the 1960s.

(3) Defeating his Greek-American opponent in 1972 in part by using the slogan, "Jesse Helms: He's One of Us!"

(4) Distributing tens of thousands of leaflets in 1976 during the Reagan-Ford primary fight in N.C. that alleged Gerald Ford was considering picking a black running mate.

(5) Opposing and delaying every effort ever proposed to impose sanctions on South Africa over apartheid, no matter how mild.

(6) Filibustering against renewal of the Voting Rights Act in 1982.

(7) Spending 16 days filibustering against making Martin Luther King Jr. Day a federal holiday in 1983, and ending up the only Senator to vote against it.

(9) Unleashing a wave of blistering, race-baiting attack ads against his 1990 black Democratic challenger Harvey Gantt, including some of the most racially divisive political advertising of modern times.

(10) Leading the opposition in the U.S. Senate to increased federal funding for AIDS research all throughout the 1980s, which left real blood on Helms' hands, because even a modest increase in spending could have saved tens of thousands of gay Americans who died horrible, painful deaths in the years before effective AIDS drugs were developed.

But according to Santorum, we shouldn't believe Helms' well-documented history of fearmongering and inflaming racial tensions, because he was a politician who exhibited "probably the starkest contrast of what the press used to portray and what the reality was."

While on the subject of Jesse Helms, Santorum also told listeners how fondly he remembers the late Rev. Jerry Falwell, the man who blamed gays, feminists, and the ACLU for the 9/11 attacks. At the time of his death in 2007, Falwell was described as "a founder and leader of America's anti-gay industry" by Matt Foreman, executive director of the National Gay and Lesbian Task Force.

During the 1980s, Falwell's Moral Majority PAC raised $69 million for GOP candidates and claimed to speak on behalf of 6.5 million members. It helped elect presidents Ronald Reagan in 1980 and George H.W. Bush in 1988, and re-elect Sen. Helms in 1984. Falwell founded the Moral Majority in the 1970s to organize evangelical Christians behind conservative Republican candidates, and claimed it was Roe v. Wade that sparked his movement. Yet the so-called "Religious Right" he helped lead first came together to preserve the right of Christian schools to maintain racial segregation.

The divisive political figures Santorum admires tell us all we need to know about how he would lead America if ever given the chance. Hopefully we've come too far as a country to go back to the days when far right-wing demagogues using religion to cloak their narrow-minded agendas were guiding our national politics. We can be thankful Santorum's chances to succeed as a presidential candidate are remote, and his time on the national stage will eventually end up in the dustbin of history alongside the chapters on Helms and Falwell, where they all belong.

Erik Ose is a veteran of Democratic campaigns in North Carolina and the author of When Harvey Met Jesse: Attack Ads of the 1990 Gantt-Helms U.S. Senate Race.