His push to drug-test poor people with children has already been rejected by federal courts, but Florida Governor Rick Scott (R) isn't taking "No, that's not Constitutional" for an answer.

The News Service of Florida reports that the Scott administration filed a 72-page brief this week to an appeals court in Atlanta, asking it overturn a lower court's ruling that demanding the urine of applicants to the Temporary Assistance for Needy Families fund (TANF) constitutes unreasonable search.

It's a fight Scott has been waging unsuccessfully since the short-lived drug testing program passed in 2011, quickly prompting a lawsuit from the American Civil Liberties Union of Florida filed on behalf of Navy veteran and single father who applied for TANF benefits while working to complete his college degree.

"At this point, Gov. Rick Scott has turned into your embarrassing uncle who won't stop ranting at dinner about how the government should drug-test all the poor people on welfare," opined Miami New Times, "no matter how clearly you explain that such a plan definitely violates the Constitution."

Scott's drug-testing program operated for about three months in 2011 before an injunction from U.S. District Judge Mary Scriven brought it to a halt over concerns it violated the Constitution's Fourth Amendment ban on unreasonable search and seizure.

In December, Scriven rejected the program outright, agreeing with a previous court that found "there is nothing inherent in the condition of being impoverished that supports the conclusion that there is a concrete danger that impoverished individuals are prone to drug use...."

TANF, which is funded by both the federal government and the state, helps struggling parents pay for food, shelter and necessities. Scott's program required welfare applicants to pay for the $25-$35 costs of drug testing up front; those who passed would be reimbursed.

The new brief argues that there is a "demonstrated problem with drug use” among people receiving public assistance, according to the News Service of Florida.

But the results of Scott's program did not back that up. New Times reports that more than 4,000 people were tested in Florida during the program, and just 108 of them failed -- well under the drug usage rates of the general population. In a 2009 survey, the U.S. Department of Health and Human Services found that about 8.7 percent of the population had used illicit drugs in the previous month; Florida's TANF applicants returned positive results at a rate of 2.6 percent.

Scott has also been arguing in court for the right to drug test some 85,000 state employees (though not, it should be noted, state legislators). Last month, the U.S. Supreme Court refused to hear his appeal, directing a judge in Miami to oversee negotiations with a union over which state workers could be tested at random.

Scott's push to test welfare recipients and state workers has come under suspicion because the healthcare chain he founded prior to becoming governor is in the drug-testing business. Scott's controlling shares in the company were transferred to a trust in the name of his wife, according to the Palm Beach Post.

The ACLU of Florida has filed public records requests to find out how much the drug-testing legal battle has cost the state, the Associated Press reports. 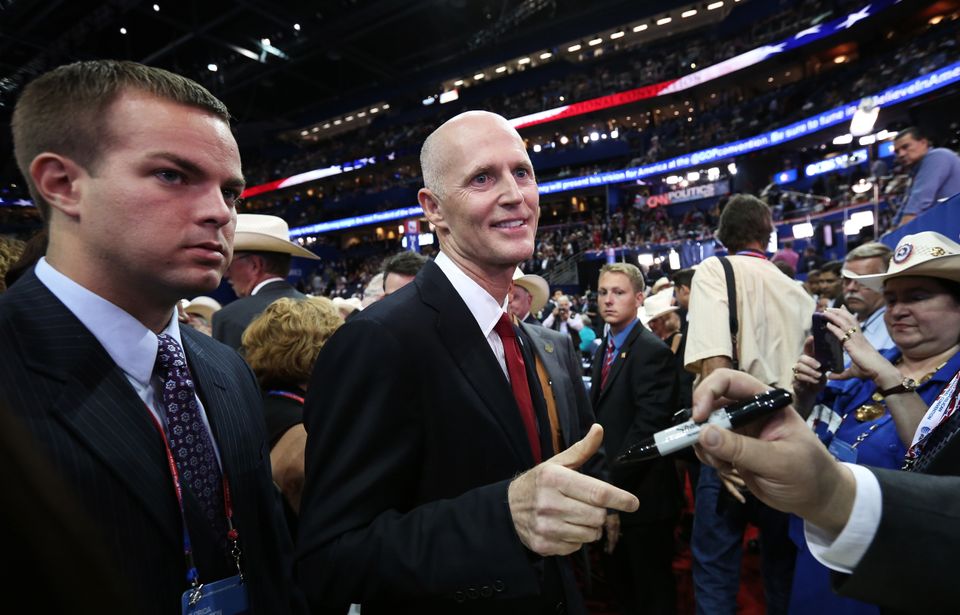 1 / 11
Voter Purge
In one of his most controversial moves since entering office, Scott pushed for local supervisors of elections in Florida's 67 counties to purge as many as <a href="https://www.huffpost.com/entry/rick-scott-florida-suing-government-voter-purge_n_1588012">182,000 voters</a> from registries in advance of the 2012 election. After push back from the U.S. Justice Department, election supervisors distributed a smaller list of more than 2,600 names. In the end, <a href="https://www.huffpost.com/entry/florida-voter-purge-rick-scott_n_1879515">only 207 voters were found</a> to be ineligible to vote.
Getty Images