“The typical attitude of Saddleback Staff as they start work each day,” the caption read on Monday (Sept 23).

Several Asian American Christians commented and blogged that the photo was distasteful.

“People often miss irony on the Internet. It’s a joke people! If you take this seriously, you really shouldn’t be following me!” Warren initially posted in a Facebook comment. “Did you know that, using Hebrew ironic humor, Jesus inserted several laugh lines- jokes – in the Sermon on the Mount? The self-righteous missed them all while the disciples were undoubtably giggling!” 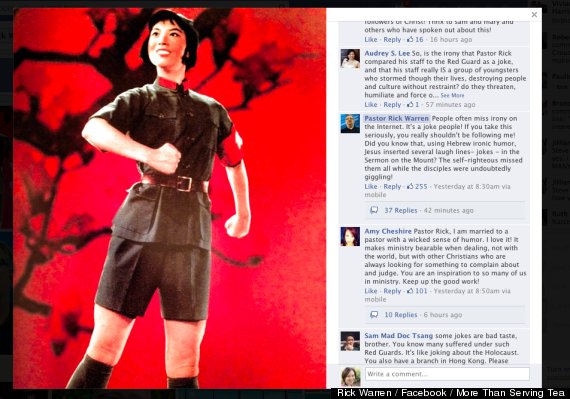 Writer and speaker Sam Tsang took the issue to his blog, drawing a reaction from Warren in the comments section.

“Do you know what narrative is behind this picture you just posted? Has any Red Guard ever raped your mother?” wrote Tsang, who has a New Testament Ph.D. and teaches part-time at Hong Kong Baptist Theological Seminary. “You just reminded [immigrants of] the nightmare they left behind and for what? For a joke on Monday?”

Warren took the photo down and apologized in the comments section on Tsang’s blog.

“Thanks so much for teaching us! It was removed instantly. May God bless you richly. Anytime you have guidance, you (or anyone else) can email me directly,” Warren wrote in part. In a follow-up post, Tsang accepted Warren’s apology.

“I see a lot of gracious exhortation for him to begin the healing process,” Tsang told RNS. “But his silence is as hurtful as his link he posted today, as if to tell us to ‘get over it because we’re moving on.’”

On Wednesday, Warren’s spokeswoman said he.does not plan to make a public statement. Unlike some leaders who have staff post to social media outlets for them, she said Warren posts his own content.

The controversy over the photo raises questions about how public or private the evangelical conversation on ethnicity should be, said Justin Tse, who is finishing a Ph.D. in geography at the University of British Columbia.

“The offensive image was public, and Warren’s initial response to it (that Asian Americans should have more humor) was also public, so the Asian American response to Warren was appropriately public,” said Tse, who is researching Cantonese-speaking Protestants. ”However, the apology is only semi-public because Warren has not addressed the 4,021 followers who liked the post and explained to them why he took it down.”

Eugene Cho, a pastor in Seattle, similarly wrote on his blog, ”It’s my sincere hope that he might take the time to share that apology publicly on his respective social media channels since that was the playground for the initial attempt at humor and explain to his fans/supporters why he chose to remove the posts.”

The issue touches on a tension among evangelicals on how to talk about and with Asian Americans. ”Those supporting Warren [could be] part of a larger narrative that Asian Americans should assimilate into a broader white mainstream,” Tse said.

Warren, who just returned to the media spotlight in an interview last week with Piers Morgan, was absent for a few months after his son’s suicide in April. His story is also in the current issue of People magazine.

This post will be updated if a statement from Warren becomes available.

“Finally back home. Staff handed me a hard copy of an email from someone offended by a picture I posted. If you were hurt, upset, offended, or distressed by my insensitivity I am truly sorry. May God richly bless you.”