In between eating, drinking, visiting folks, arguing with extremist fundamentalists on Twitter and plugging various shows and DVDs, (only the last one of these is absolutely necessary, the first few I do for fun) my main focus of the the last few days and the next few weeks has been the Golden Globes. I've written a few jokes, written and recorded the promos and done the press pics. Now I just have to pop up on a couple of chat shows and do press interviews. The problem is I think I've said everything there is to say about the ceremony really. But that won't get me off the hook. It all started for me in America at the Globes I guess. And now I've come full circle. This WILL be my last turn as host. At least for a long time anyway.

It all started eight years ago.

A couple of weeks after the final episode of The Office aired in the UK, I was flown to LA by the BBC to attend The 61st Annual Golden Globe Awards.

I nearly didn't go as I thought it was a long way to travel to lose. And I was quite sure that that was exactly what was going to happen. Arriving on Saturday, 24 January, the day before the ceremony, I had to go shopping on the morning of the awards for something to wear. It wasn't Armani, it wasn't made to measure and it wasn't even given to me for free. Didn't they know who I was? No. Hardly any of them did. Anyway, the new outfit did the job, so now I could get this pointless exercise over with. Jane and I got back from the shopping mall and immediately had to get ready. It's nice putting on a tux with jet lag in 90-degree heat. We left the hotel at about 2 pm and I hadn't had lunch. I got the limo to stop at a garage on the way and I bought a family pack of some sort of Cheesy Wotsits. I ate these in time to get out at the red carpet. Jane pointed out that I now had orange hands and lips. I washed in the ice bucket and tried to get some of the gunk off my teeth and gums with a tissue. We wondered if the girls from Desperate Housewives in the limo next to us were doing the same thing. Maybe. They did all look a bit orange when they got out, but it was probably a tan rather than monosodium glutamate. 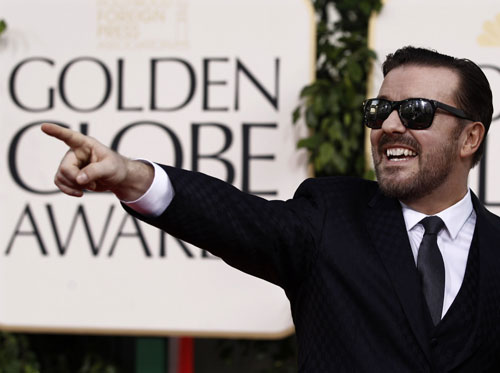 To cut a long story short, the unthinkable happened and The Office won the Golden Globe for best sitcom.

I made a rambling impromptu speech and of course forgot the name of the organization that awarded the honor.

Little did I know how many times my name would be linked with the Hollywood Foreign Press in the future.

Moments after I won the Golden Globe for best actor in a comedy, I made another rambling speech and was swept off to do loads of interviews. I can't remember any of them to be honest but I remember thinking it was one of the most surreal and important nights of my career. It still is.

The next day I shot my first dramatic role in the TV show, Alias - I still haven't seen the episode, but I've heard it came out OK.

The same week we started negotiations on a US remake of The Office. That came out okay too. And I was called in for an audience with the team behind The Simpsons. Matt Groening asked if I'd like to appear in the show. I said, "What are the hours?" He said, "The hours are great." I laughed and said, "I'm joking. Of course I want to be on the show. It's the greatest show in the world."

Later Al Jean asked if I wanted to write the episode, too. This moment overtook winning the Golden Globes as the greatest moment of my career so far. 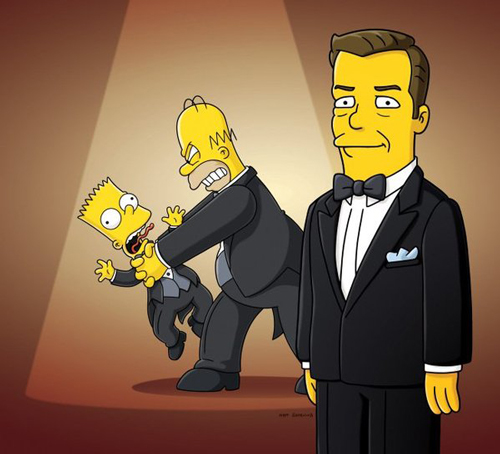 I also met one of the writers, Matt Selman. He directed my episode of The Simpsons a couple of years later and at the moment we are working on The Flanimals movie together. So that came out okay too.

A lot happened that week in January 2004. The effects of which are still being felt. I was asked to host the Golden Globes in 2010. I guess it went OK as they asked me to host again in 2011.

Judge for yourself how that went...

I did it twice because I wanted to improve on the first year's performance. I think I did that. I did it by realising a crucial fact about award shows. They are fucking boring unless you are winning an award. Celebrate yourselves by all means. Take yourselves as seriously as you want and hand each other prizes. But don't televise it unless there's something in it for the viewers. An award show is not a spectator sport. I tried to make it one. I made a choice. Please the 200 most privileged people in the world, in the room, or please the 200 million ordinary people watching around the world on TV? I chose the latter. It wasn't a particularly brave decision as things like that don't really affect me either way. I don't really count them as part of my oeuvre. They are outside my career so to speak. I host the Golden Globes, like some businessmen play golf. For pleasure. Then, Monday morning, I'm back at work. I don't have to worry about what I say based on who might give me a job one day. If I think it's funny, and/or true, I'll say it. You see, I create my own labour. I write all my own material. I direct and produce all my own stuff basically. I'm not beholden to any so-called 'big wigs' or overly important people. Some would say I've got 'Fuck You' money. I would say I please myself and always have. 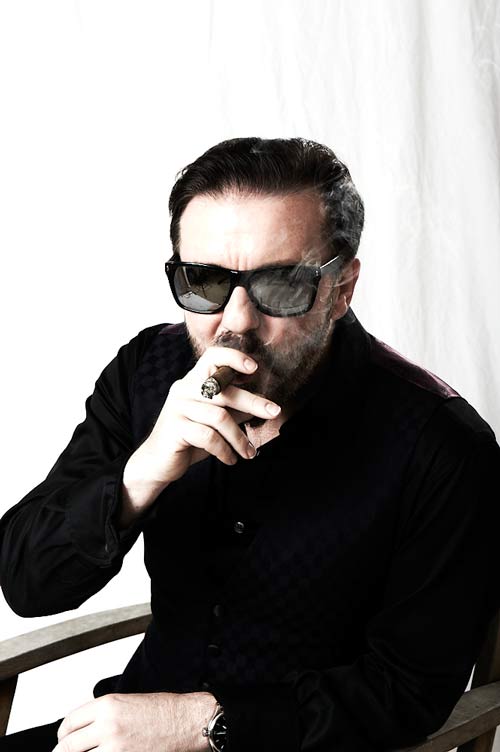 It's not about power. It's about artistic freedom. And if it is about power, it's a power you can give to yourself anytime you want. If you can't be bought, you're the richest man in the world. I just always feel if you can make something from scratch you'll always be okay. Growing up, one of my favorite quotes was "Ability is a poor man's wealth." John Wooden said that. And I tried to prove him right.

Amazingly I've been invited back to host next year's ceremony, too. What have I learned from last year's outrage? Nothing at all. Ha ha. Happy New Year.