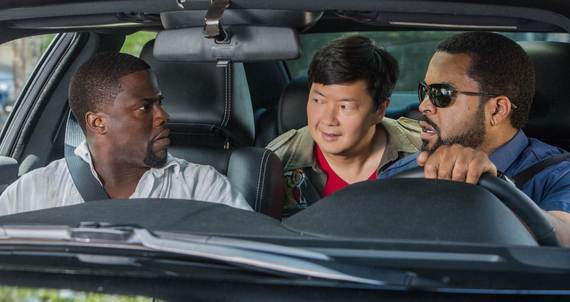 Bad Boys premiered in 1995. Eight years later in 2003, Will Smith and Martin Lawrence teamed up again and the vacation did everybody a world of good. Though this series is not nearly as slick as the aforementioned, the Hart and Cube duo have similarities. Awkward cop buddies. Haphazard, unorthodox crime fighting. Oh, and there's the setting. Hart and Cube have taken their show to South Beach, where the sun shines on everything, except the script.

The goofy, annoying Ben Barber (Hart), who once patrolled the streets of Atlanta with his curmudgeon brother-in-law-to-be police detective James Payton (Cube), has been sidelined. Payton and his new partner (Tyrese), who are undercover, are on the verge of arresting a drug dealer. When the tables get turned on them, and James has the barrel of a gun stuck in his gut, it is the flighty, silly Ben who rescues him. And so it goes, time after time, James degrades Ben, but in the end the scamp comes through.

James finds a flash drive with data that can't be unlocked. He tracks the encrypted drive to a geek/hacker in Miami, named AJ (Ken Jeong, The Hangover series). As they hunt him down, they're helped by tough-as-nails Miami homicide detective Maya (Olivia Munn, X-Men: Apocalypse). Clues lead to a local, wealthy, well-respected entrepreneur, Antonio Pope (Benjamin Bratt, Miss Congeniality), who is secretly a crime lord moving lots of drugs and guns. Can the boys make him pay for his crime? We all know the answer.

There was something so fresh about the original Ride Along. The cocky buffoon diminutive comedian Hart played against the dour bad-attitude ex-NWA member. The pairing was box office gold and vaguely reminiscent of Abbott and Costello.

Screenwriters Phil Hay (Clash Of The Titans) & Matt Manfredi (Clash of the Titans) have failed miserably at reinventing the comedy crime genre. Their script is feeble and formulaic. Plot pieces fit together too easily and subplots don't amount to much (Barber is in the midst of planning his wedding and Sheri Shepherd plays a wedding planner who is a bully. So what.)

There isn't one memorable line of dialogue worth passing on. And that's a shock considering Hart is a master improviser. The screenplay's one engaging gimmick: Barber, who is a champ at playing Grand Theft Auto, uses his video game driving skill when he and Payton are being chased by hoods with guns. Barber commands the steering wheel, and speeds off like Mario Andretti. Some of these sequences are shot in a digital mode, and that's about as inventive as the film gets.

Director Tim Story (Barbershop, Think Like a Man) brought verve to the first Ride Along. It was edgy, funny and outrageous at points. It's almost as if he has run out of fresh ideas, minus the chase scenes. Most of the time, Hart and Cube look flat, are poorly choreographed and staged, and they stare into the lens like they're hoping for guidance. Once in a while, Cube sucker punches a guy, or Hart shoots the wrong person. You chuckle, maybe laugh for a hot second. But you want more, steady, hilarious humor.

The director of photography Mitchell Amundsen (Horrible Bosses 2), production designer Chris Cornwell (Ride Along), editor Peter S. Elliot (Think Like a Man), costume designer Olivia Miles (Entourage) and composer Christopher Lennertz (Ride Along) do a competent job, but nothing that elevates the proceedings.

Cube's performance is dry like the character. Sherri Shepherd, as a domineering and emasculating wedding planner is obnoxious, but not funny. Tika Sumpter is sweet as the impending bride and deserved more screen time. It's almost painful to watch an actor of Benjamin Bratt's caliber in a throwaway movie like this. Yes he brings gravitas to his villainous character, but it's clearly a waste of his talent. Maybe it's time to find a new agent?

Granted Hart is the comedian of the hour. He singlehandedly has made comedy buddy movies a cottage industry, and he's the common denominator. That said, it might behoove him to take a hiatus, work on his craft and bring his game up a notch. He has the potential to rise higher. Now, before he gets a reputation for being another Adam Sandler.

Count on this comedy to find a loyal audience. Hart has 21M followers on Facebook, 24.6M follow his Tweets. His fans will support him. But they deserve better

Bad Boys and the Beverly Hills Cop series too gave their franchises room to breathe. Maybe the Ride Along team doesn't have to wait eight years for the next installment. But two years is cramping everyone's style.