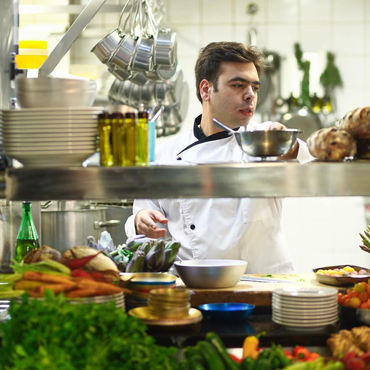 There is no place I'd rather "break matzoh" this year than at the James Beard House with award-winning Tel Aviv chef Raffi Cohen. But I'm fully committed both nights at the homes of wonderful friends, whose Seder meals are "pre-ordained" and follow the traditions of the Ashkenazi kitchen. Chef Cohen's menu is instead infused with the flavors, and practices, of his North African Jewish family. Add to that the cacophony of Israel's multiple cultural influences, its Technicolor produce and site-specific ingredients, and you've got an unorthodox celebration of Spring and renewal. While it is customary to say at the end of each Seder, "Next year in Jerusalem," perhaps a chorus of "This year in New York" is most fitting.

It is noteworthy exploring the differences in culinary traditions between Israelis and American Jews, and Ashkenazi (Jews from Germany and Eastern Europe) and Sephardic Jews (from Spain and Portugal). There are some rich disparities. For example, Sephardim eat lentils, chickpeas, corn on Passover, whereas Ashkenazi Jews do not. The use of quinoa is of some debate. Chopped liver, chicken soup with matzoh balls, gefilte fish, brisket, kugels and compotes make up the menu of the latter, while Sephardic Jews enjoy rice and pulses, prasa (Balkan leek patties) and braised lamb.

On Saturday, April 23rd, Raffi will present a mouthwatering spin on all of it. His non-traditional Seder plate includes swiss chard with Moroccan harissa and preserved lemons, potato with soft-boiled eggs, bottarga and Israeli olive oil; and a Sephardic-style Charoset. His menu highlights the many harbingers of spring, including fava beans, artichokes, peas, and delectable-sounding recipes such as spiced ground lamb-stuffed artichokes with tahini, grouper kebab with beets and horseradish, Samna-braised rice-stuffed black cabbage with Uzbek raisins, and Z'roa, a lamb shank and lamb chop paired with an inventive "corn couscous" and celery. He skirts the issue of mixing dairy with meat by using Jerusalem artichokes to make "cream" for garnishing a soup, and by using bitter almond milk to make gelato.

Raffi is the chef and owner of one of Tel Aviv's most sophisticated restaurants "Rafael"-- a place where, not so long ago, we shared a wonderful meal with Israeli magazine publisher and author Janna Gur before hopping on a plane back to the States. Chef Cohen, who grew up in Jerusalem, is considered a groundbreaker in contemporary Israeli cuisine and mentor to the newest generation of Israeli star chefs. (Before opening Rafael in 2001, he worked as chef at the King David Hotel, at L'Arpege and Pierre Gagnaire in Paris, and even at Nobu in New York.) I've been following and writing about Israel's food scene for decades, with a seminal article in the New York Times called A Region's Tastes Commingle in Israel. Raffi's Seder menu is its embodiment - a narrative of Israel's culinary journey as well as his own. He'll be bringing some of Israel's finest ingredients with him - from first-class olive oil, to superlative wine from the Golan Heights Winery, to fresh grape leaves from the Carmel Market.

Raffi's big, inclusive style of cooking encompasses many of the traditions of the countries whose borders hug the Mediterranean coastline. (His own restaurant is just a stone's throw from the sea.) His flavors are a bazaar-in-a-bottle and precisely why Naama Shefi, a culinary curator and Israeli food guru, and well-known food writer Ronit Vered (along with the Consulate General of Israel and the Ministry of Tourism) teamed up to create this communal food festival. Naama, who grew up on a kibbutz loved sharing Seders with the entire community, with many families having at least three generations present. Ronit's family, although quite liberal and secular, does a Seder in their traditional manner - with stuffed matzoh with potatoes, meatballs with prunes and carrots, and lots of singing at the table.

For details and tickets to Raffi's Seder click here. Everyone is welcome.