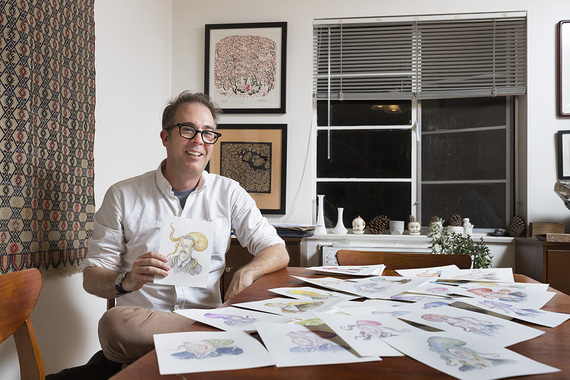 After leaving a corporate job in 2013 and learning that his wife was pregnant, Crow, who lives in Los Angeles, took advantage of what he realized would be a small window of freedom to pursue an offbeat project. During "From Dusk 'Til Drawn," a fundraiser and "drawing rally" at the Museum of Contemporary Art in Santa Barbara, Crow spent 24 hours straight (he is a coffee enthusiast, after all) sketching U.S. vice presidents...with octopi on their heads. Why? He shrugs. "It was like a lightning bolt from Zeus."

He has since refined the "Veeptopus" collection, completing the full set (including such beloved notables as, er, Schuyler Colfax and Garret Hobart) and selling the ink-and-watercolor drawings online and at art fairs. Crow's career has been peripatetic; he has taught English in Japan, earned an MFA in film and now makes his living as a writer, teacher and -- as Hannibal Hamlin and his cephalopod headgear well know -- visual artist.

If you are in LA March 1st, the opening party for Veeptopus at The Hatchery. Details here: www.thehatcherypress.com
or at www.jonathan-crow.com