A right-wing group in Houston engaged in a systematic voter suppression and intimidation effort used a doctored photo in its showcase video. Tellingly, a hand-lettered sign carried by an African-American woman at a 2000 Florida, Gore-Lieberman recount rally was changed from, "Don't Mess With Our Vote," to read, "I Only Got to Vote Once."

Huffington Post editors first suspected the photoshopping after I posted "Possible Arson and the Right's Texas Voter Suppression Effort" regarding King Street Patriots' attacks on a nonprofit voter registration effort and the mysterious fire that destroyed all of Harris County's (Houston) voting machines.

In my regular Sunday FireDogLake column, I posted a follow-up piece, "Contempt for Democracy: Attacks on Voting Rights," that included a link to DigitalDupes.org, which had launched an effort to locate the original photo. Within hours, Newshounds found it.

In addition, a Gore/Lieberman sign was altered to read, "I'm With Stupid." Here is the doctored video as presented in King Street Patriots' video, followed by the original photographs. 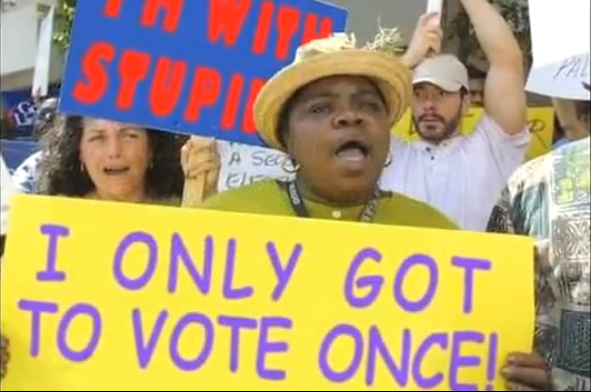 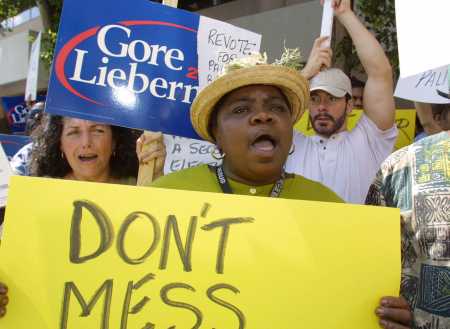 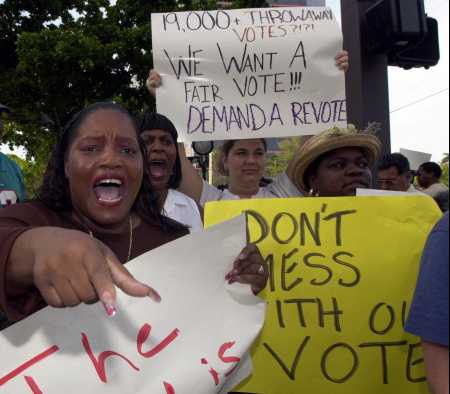 In the video, King Street leader Catherine Engelbrecht says their effort is all about the truth, that they just want true, fair, honest elections. But if they are so committed to the truth, why did they use doctored photos? Why did they lie?

Because their real intent -- as it has been for similar voter suppression efforts for decades -- is to create barriers between the ballot box and the voters. They want to suppress the vote of people they suspect of opposing their agenda. In this case, as in most, that means assaulting the voting rights of the poor and minorities.

Their pious and sanctimonious rhetoric works -- most of the time. Political journalists seldom get beyond the "he said/she said" accusations and counter-accusations in voting controversies. This deception, in a showcase video, puts the lie to King Street Patriots claims to the truth and destroys whatever credibility they might have had.