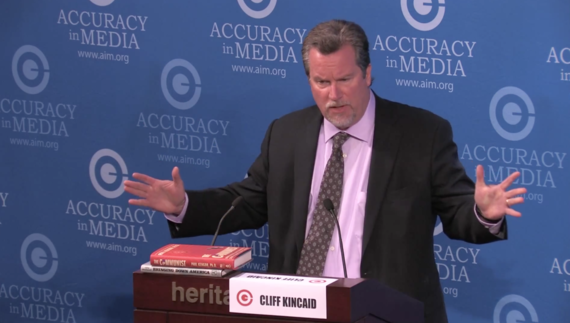 While the pontiff is building bridges to Communists in Cuba, nuns who had been under suspicion, Muslims, Jews, Protestants and even people outside the faith, two dissenting groups stand out: Catholics on the Left, in whose eyes he is not moving fast enough with respect to church laws, policies, and theology to effect the changes which they regard as urgent, and Catholics on the Right, who are displeased by almost everything this pope says and does.

So predictable are his critics on the Right that we seldom engage in sighting them or commenting on them in Sightings. But never to notice them does a disservice to those who would like a full accounting of the Pope-in-public, the Pontiff-in-the media, etc.

So, to remind ourselves that the Rightists are out there, let's just for once focus on a sample, in order to transmit a bit of the flavor and tone of what they have to say.

Out of many choices, let's notice, as representative, Cliff Kincaid (see "Sources."). He directs the Accuracy in Media's AIM Center for Investigative Journalism. The Southern Poverty Law Center people (see "Sources") list a few score of his victims, a.k.a. subjects.

Kincaid's blog last Friday is headlined "The Catholic Church Has Gone Socialist." He writes that it is dawning "on many in and out of the media that Pope Francis has come down on the side of the 'progressive,' and even Marxist, forces in the world today." He quotes his spiritual kin Stephen Herreid on this "new Catholic scandal" which is "as significant and terrifying as the presence of pedophiles in the church."

The Pope--this is Kincaid again--"has made common cause with the forces of international Marxism, which are associated with atheism, the suppression of traditional Christianity and the persecution and murder of Christians," so "[c]onservative Catholics and many other are terrified of what is to come."

Kincaid also quotes Timothy Ball, author of The Deliberate Corruption of Climate Science, who argued in an interview that "the Catholic Church is regretting making him the pope" after "the powerful Cardinals pushed" Pope Benedict "aside."

From this "Right" angle, Pope Francis is seen as too friendly to "Liberation Theology" heroes; he "even" greeted Gustavo Gutierrez as an official guest of the Vatican.

Kincaid cites with favor the late Malachi Martin, discredited everywhere but on the Catholic Far Right, who had written critically that "the most powerful religious orders of the Roman Church...all committed themselves to Liberation Theology."

Also in the figurative gunsights on the right are Francis-favored advocates of "sustainable development:" "The pope's left-wing supporters at the Catholic Climate Covenant are ecstatic over [the pope's] upcoming encyclical on ecology and climate change."

Let the Southern Poverty Law people take over from here in reporting. They remembered Kincaid applauding a proposed law in Uganda which would impose the death penalty on large numbers of gay men.

They also remembered Kincaid buttressing his anti-gay approach by reference to a book by James Wanliss, who argues that the environmental movement "is a religion with a vision of sin and repentance, heaven and hell, Its communion is organic food. Its sacraments are sex, abortion, and when all else fails, sterilization.... Both professing Protestants and Roman Catholics bear a burden of guilt for the current political mess we are in with the global warming and other hysterias."

Get ready for more of these attacks from the edges of the crowd when the pope visits the United States or issues his encyclical. And listen for the sounds of hysterias.

Kincaid, Cliff. "The Catholic Church Has Gone Socialist." Accuracy in Media: For Fairness, Balance and Accuracy in News Reporting, May 12, 2015, AIM Column.