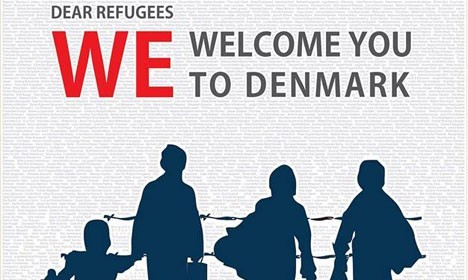 On a May day in Copenhagen, the sun shining brightly, the greatest security risk seems to come from bicycles speeding along the streets. But not all is calm in the state of Denmark. Immigrants and refugees have provoked a national soul-searching about human rights, international responsibilities, national values, and the significance of religious freedom.

Danes are some of the world's most dedicated internationalists. Young people travel the world and speak many languages with ease and grace. International affairs and foreign aid priorities and principles are dinner table conversation. Equality and freedom are seen as synonyms for human rights. There's a strong strand of nationalism, however, that goes alongside this openness to the world. My Danish friends love their country with a fierce pride. They never hesitate to bring out their Danish flag and support the social and ethical principles that underlie the welfare system. They relish Danish traditions from cookies to masterful farming even as they embrace new ideas and adventures.

In conversations this week in Copenhagen, however, some of these heartfelt values seem to come into conflict with one another. This was evident in a thoughtful discussion at the Danish Institute for Human Rights and in discussions with colleagues and friends across a wide spectrum. Denmark was the first country to ratify the 1951 Refugee Convention and since the 1980s especially has welcomed refugees and migrants, offering generous support consistent with their commitment to rights, equality, and welfare. The violence around the 2005 cartoon crisis caused a first shock, and, I was told, concerns have multiplied since then. The terrorist attacks on Paris and Brussels were close by. In short, integrating newcomers has caused some bumps. Concerns have come to a crescendo with the current influx of refugees as Denmark welcomed about 15,000 refugees last year, in a national population of some 5.6 million.

There are plenty of matters to discuss about the rights and responsibilities of the current refugees, including recent measures that are viewed as rather draconian, for example in treatment of refugees' assets and approaches to family reunification. But the discussions extend beyond the new arrivals, to reflections on Danish experience with integrating or assimilating very different newcomers in a society that is open but hardly diverse. Most of these newcomers have adapted well, but a significant minority has not. The most complex issues swirl around the Muslim immigrants and refugees and thus involve what are aptly described as "tensions" between religious freedom and human rights.

No-one knows exactly how many Muslims there are in Denmark - perhaps 200,000-250,000. They enjoy a religious freedom à la Denmark that includes tax advantages for mosques and freedom of expression (although there are laws on the books against blasphemy). But a documentary filmed clandestinely by the state-owned TV2, on Islam as it is preached by some imams in Denmark, sent shockwaves across the society. Clips (aired earlier this year) show an imam preaching murder of apostates (seen as those who leave Islam), supporting the beating of women and stoning for adultery, and urging women beaten by their husbands to go to religious authorities, not the police. Women were urged not to work. Beyond this program, young Danes are fighting with Daesh, and crime networks are linked to migrants (as well as others). Some places are no-go zones because of hostility from new migrants. Some migrants criticize Danish and "western" society and values quite harshly, which puts Danish backs up. Even liberals, I was told, are concerned, above all because they see the basic values they have fought for called into question. And the right wing Danish People's Party is seeing sharp increases in popularity.

The implications for values and religious freedom emerge in different forms. Some question the high cost of supporting refugees as has become the custom in Denmark - perhaps $50,000 a year. What could be done with those funds to support people in countries of origin? And what about Danes who deserve support? A substantial part of foreign aid funds has been reallocated to domestic refugee support, limiting the scope of Danish capacity to support poor and fragile states. Treatment of refugees, most of them Muslims, have implications for international affairs, with tradeoffs rather starkly presented. One Danish kindergarten is required to serve pork, as an assertion of Danish culture and perhaps even values. There is discussion of overseeing or somehow controlling what is said in mosques as a security measure. These measures call into question the meaning of Danish values of tolerance and freedom of expression.

Thus a discussion about protecting persecuted religious minorities in the Middle East or in Myanmar flows easily into the rights of Muslims to practice their faith but also to be honored for it in a country where freedom from religious impositions seems as strong an impulse as defending the right to practice one's faith. The meaning of equality between women and men is fundamental to the understanding of human rights, which encompass the right to religious freedom. The compassion and concern for the plight of people fleeing from persecution that underlie Denmark's welcome of refugees opens up new questions about how far the human rights values that come close to taken for granted are called into question.

These debates in Denmark, as in many other societies, are far from settled. And not far from the surface is a keen awareness of the realities of climate change and warnings that the refugee and migrant flows we are seeing are just the beginning. The tensions involved need not be contradictions; there are ways to combine freedom and tolerance, religious and secular viewpoints, diversity and common values. But they demand an active, thoughtful, and probing examination and a willingness to confront difficult realities and to keep fresh and alive the visions that underlie the principles and values that we cherish in both human rights and religious freedom.