Rihanna and Chris Brown made their first public appearance together in years, spending Christmas Day at a Lakers game in Los Angeles.

Rihanna and Brown were seated courtside at the New York Knicks versus Los Angeles Lakers game at the Staples Center on Tuesday, according to Us Weekly. They were "laughing and chatting" and "looked happy together," a source told the magazine.

The Christmas Day game marked Rihanna and Brown's first public appearance in years, TMZ notes. They haven't attended a public event together since 2009.

The two, who have yet to confirm whether or not they are officially dating again, arrived at the arena in the same car but exited the vehicle separately, TMZ reports. They eventually met up inside and got cozy during the game. The pair left the arena holding hands, according to Just Jared.

Later on Tuesday, Rihanna posted an Instagram photo of her and Brown on the side of a road in L.A. with the caption, "ThugLife #merryChristmas." In the shot, the "Diamonds" singer sits smoking on the hood of the car while her maybe-boyfriend stands shirtless beside her.

Rihanna and Chris Brown's on-again, off-again relationship has been particularly confusing over the past month.

The two reportedly spent Thanksgiving together in Germany, but just two weeks later Brown was rumored to be partying with ex-girlfriend Karrueche Tran. Singer Christina Milian, who is friends with Tran, claimed that the model and the "Don't Wake Me Up" singer are still a couple, but Brown continued to share photos of him with Rihanna.

One week before the Christmas game in L.A., Rihanna posted an e-card to Instagram hinting that she was single again.

PHOTO GALLERY
Rihanna and Chris Brown's Christmas with the Lakers 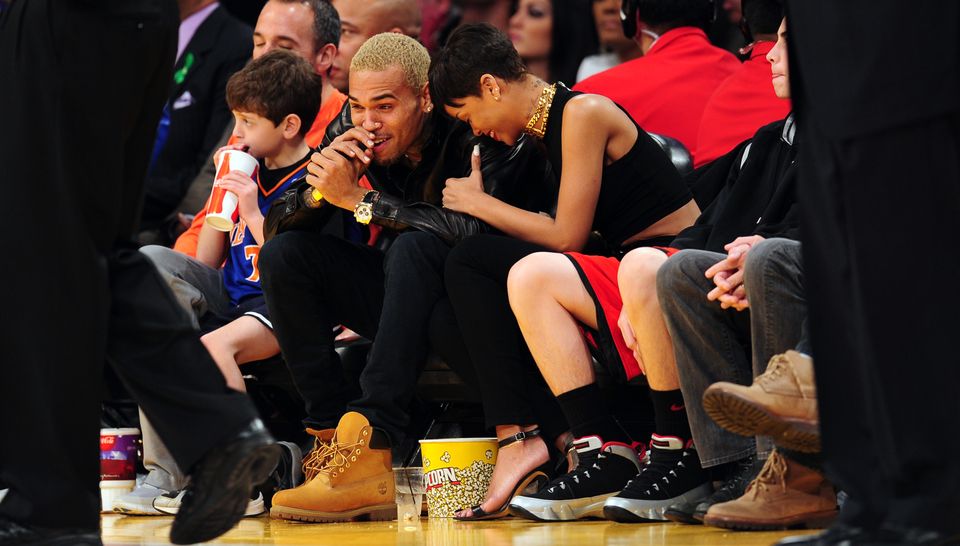