Rihanna, 24, and Chris Brown, 23, have not yet confirmed their relationship, but RiRi might have given all her fans a hint after posting a picture of her former boyfriend on Twitter last night, Nov. 24.

In the picture, a shirtless Brown is lying in an unmade bed, with a Simpsons-themed comforter. "#BartObsessed," Rihanna wrote along with the photo. Although Brown's face isn't visible, his tattoos are on full display -- as are his boxer-briefs.

After her 777 tour last week, Rihanna hopped on her private jet to Berlin, Germany, where Brown -- who duets with Rihanna on "Nobodies Business" of her new album "Unapologetic" -- was performing his Carpe Diem tour on Nov. 22.

"All alone in my big ole jet!!! See u soon lover," she tweeted, revealing she was spending Thanksgiving with Brown.

But although the exes are spending a lot of time together, both Rihanna and Brown have denied their romance, with Brown saying they're "working on their friendship."

"Me and her have history, and me and her are definitely always going to be best of friends," he told Power 106 radio host Big Boy.

"If I had it my way, it would be really nobody's business," Rihanna added to Andy Cohen.

See the photo of Chris below: 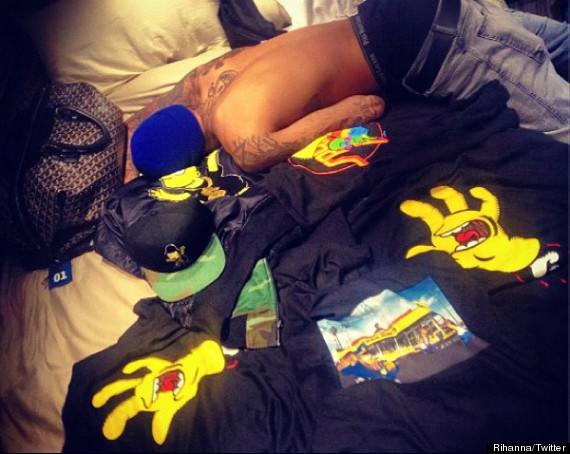