Rihanna lived up to her "Fashion Icon" status Monday night while attending the 2015 Met Gala.

The mega star wowed in a yellow look that can be described in two words: gorgeous and gigantic. In keeping with the evening's theme of "Chinese Whispers: Tales of the East in Art, Film, and Fashion," RiRi opted for the show-stopping couture look by Chinese designer Guo Pei, complete with a golden headpiece. Not only does the design boast intricate embroidery and fur, but it has one of the longest trains we've ever seen. We caught a glimpse of what looks to be a pink dress under the yellow coat, but leave it to Rihanna to keep us guessing. 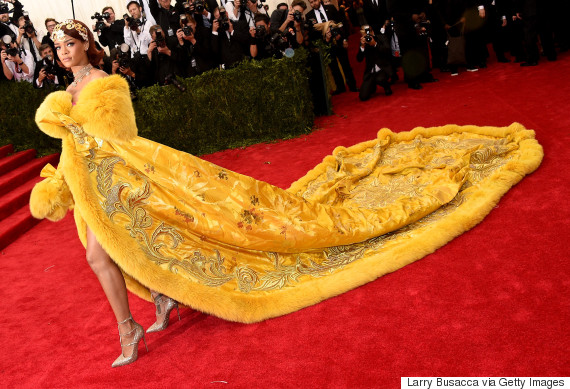 And when a celeb rocks such an over-the-top look it's no surprise that memes will follow. Here are just a few of the things that folks are already comparing Rihanna's dress to:

Nevertheless, most of Hollywood was on hand for the annual event and Rihanna still managed to steal the show! What do you think of her look?