On New Year's Day, Fabian Cruz — a mentally ill inmate at Rikers' Island that was supposed to be on suicide watch — hanged himself, continuing a disturbing trend of mentally ill patients being met with brutality at the facility.

In a HuffPost Live interview Monday, Michael Schwirtz, who wrote the aforementioned story, said changes are on the way, but they might not be enough to truly foster change.

"Mayor Bill de Blasio has proposed a number of different changes, such as expanding the number of video cameras and increasing the number of programs, therapeutic programs, for inmates," Schwirtz told host Alyona Minkovski. "But as we see from this case, the suicide over New Year's, there's still a lot of work to go."

It is not just the mentally ill receiving harsh treatment at Rikers' Island, either. Jason Echevarria died after a guard could not be bothered to attend to the vomiting inmate after Echevarria ingested toxic soap. Jerome Murdough, a homeless veteran arrested and brought to Rikers for trespassing in a stairwell, trying to find warmth on a frigid night, died eight days after his incarceration. His jail cell had malfunctioning equipment that caused the temperature to rise above 100 degrees. "He basically baked to death," a city official told the AP after Murdough's death.

"So much goes unnoticed," Paul Prestia, a criminal defense attorney in New York, said. "So much goes without any recourse. Just the violence. It's so endemic to the culture in Rikers Island."

Watch the rest of the clip above, and catch the full HuffPost LIve conversation here. Sign up here for Live Today, HuffPost Live's new morning email that will let you know the newsmakers, celebrities and politicians joining us that day and give you the best clips from the day before! 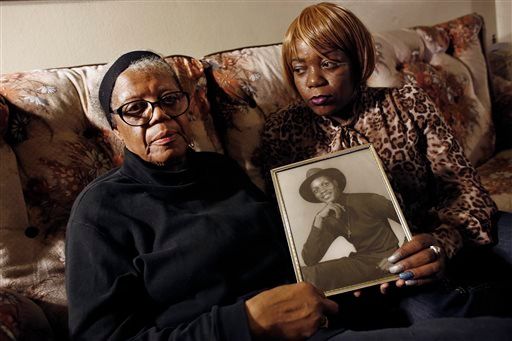 1 / 6
Alma Murdough and her daughter Cheryl Warner hold a photo of Murdough's son, at her home in the Queens borough of New York. Jerome Murdough, a mentally ill, homeless former Marine arrested for sleeping in the roof landing of a New York City public housing project during one of the coldest recorded winters in city history, died in a Rikers Island jail cell that multiple city officials say was at least 100 degrees when his body was discovered.
AP Photo/Jason DeCrow